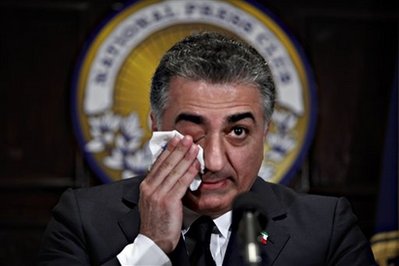 I just had the privilege of reading a blog by one of the most civil, well organized, kind and truly patriotic contributors in this site. I am referring to Ms. Mehrban and her title called [Driving wedges in the secular ranks]

As I was placing a comment on her beautiful writing I started thinking[I know  – not becoming of me] and here is how it went in my mind:

Yes, IR been working very hard in driving the all mighty wedge between the opposition, BUT we can not ignore the fact that opposition, particularly abroad, is headless [leaderless].

The  Green Movement in Iran, in my belief, still has the momentum and the energy to follow up on the premise of change. A permanent and lasting change from yolks of Islamic Regime.
BUT…… I also believe that that movement might need some time to mature, in order for a strong leader to emerge who can unify and consolidate all the factions, where by the complete change and transformation can take place.

With considering the facts above, and  at the expense of few dozen uninvited attack, I have few questions for his majesty to be:

Question #1: Does this gentleman has ANY, NONE or ALL of the qualification that it takes to consolidate a movement[revolution] of this magnitude? Why or why not??

Question #2: Why and why not it is considered blasphemy by all of his devout followers including  characters such as Mr. Ahy  to question and or criticize the borne into man of no accomplishment?

Question #3: If[which I doubt very seriously] Mr. Pahlavi is a proponent of democracy, which has embedded in its roots, freedom of speech, and right to question a person of authority, why is it that his cronies are hellbent in silencing anything that might be of any offense to this person of no accomplishment?[Be jegheye ishum bar bokhoreh?]

Question #4: Why and why not this person Reza Pahlavi, , who sets claim to 3000 year old heritage of Cyrus and Xerxes, who allegedly is a advocate of human rights is yet to go on records in condemning action of his father, who is the sole responsible, ineffective, tyrannical, treasonous, 3 times fugitive in the face of adversaries, man who pledged his soul to kinds of Nixon, Carter and Kissinger, man who did not have the guts to stand and defend the people, man who ……………………….

Question #5: Mr. Reza Pahlavi…… Who do you serve? Why is it that you boycott elections and once street fights breakout between our brave youth and Baseeji militia, all of sudden you find a microphone to regurgitate your repetitious talking point?

Question #6: How stupid do you really think Iranians who are sacrificing day in and day out are? As stupid as You dude?………….. I beg the differ, no one can beat you buddy.