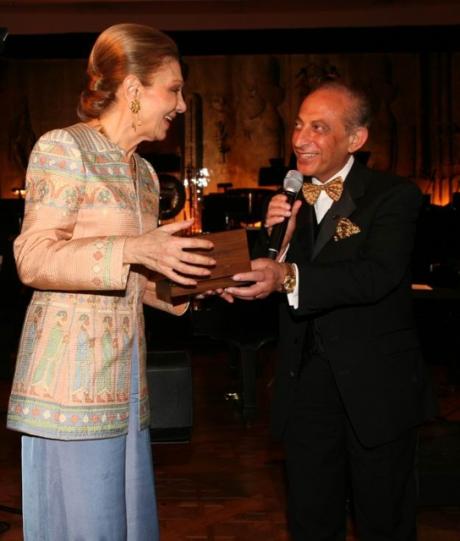 Fortunately not All IRANICANS suffer from Alzheimers to forget where they come from nor are ungreatful to their past. Jamshid (‘Jimmy”) Delshad a native of Shiraz, Iran offers City Key of Beverly Hills to Shahbanou Farah Pahlavi during City Hall Ceremony. Delshad starts 2nd Term in Office.

Delshad left Shiraz, Iran in 1959 and came to the United States with his brothers. He studied at the University of Minnesota and received his bachelor’s degree from California State University, Northridge.He started a technology company in 1978. In 1990 he became the first Persian Jew to be elected as president of Sinai Temple, Los Angeles’ oldest and largest Conservative congregation. In 2003 he was elected to the the Beverly Hills city council, and became mayor in 2007.

Cyrus The Great and the Persian Empire:

On March 16, 2010, Delshad began his second one-year term as mayor of Beverly Hils

In the 105 year history of Beverly Hills, Jamshid (“Jimmy”) Delshad, is the second person to be Mayor twice in a 4-year city council term. He is the first Iranian Mayor and is the highest ranking Iranian public official in the U.S. To learn more about him, please watch this video and see how he brought Iran into Beverly Hills on the night of second term installation March 16th.

Cyrus The Great and the Jews according to Holy Texts and Archeological sources:

Shah Iran Tribute to Cyrus the Great at Pasargardae:

Iranian of the Day: Jimmy Delshad second term as Mayor of Beverly Hills