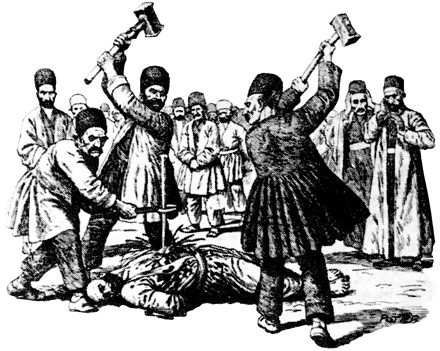 Human rights and globalization share a common vocabulary. No matter where people may live in the world they share a vital interest in the basic requirements of liberty, including the right to “freedom of thought, conscience and religion;” the right to “freedom of opinion and expression” and the “right to peaceful assembly and association.” These and 27 other specific freedoms outlined in the Universal Declaration of Human Rights were adopted by the United Nations more than 60 years ago.

Partly as a result of this declaration as well as a growing global view of social responsibility, human rights transcend national borders. Globalization is more than just economic interests—it includes a social and political interdependence that promotes human rights worldwide.

Unfortunately for the people of Iran and most especially for Iranian Bahais, human rights are neither widely recognized by the Islamic government nor is their application evenly distributed. Yet human rights are universal exactly because they define the interests of those without power—even in authoritarian states like Iran.

No country in the world has unlimited power to do whatever it wants to its own people. The very idea of national sovereignty includes a dual responsibility: to respect the sovereignty of other countries but also to respect the rights of its own citizens. As a member of the U.N. and signatory to a number of international conventions, the Islamic Republic of Iran has to face some tough questions about the treatment of its own people and especially the 300,000 Iranian members of the Bahai Faith.

Bahais have been persecuted ever since their religion was founded in mid-19th century Persia (present-day Iran). The Iranian Bahai community is often viewed as the canary-in-the-coal-mine regarding human rights abuses because as the nation’s largest non-Muslim religious minority they suffer the most discrimination—denied access to higher education, prevented from working in government jobs or receiving federal pensions to cite only a few examples.

Since obedience to government wherever Bahais reside in the world is a matter of religious principle, the Bahais in Iran are a convenient scapegoat for the Islamic regime which seeks to redirect public ire over its difficulties. Following the Ashura Protests last December, a group of Bahais were arrested on January 3 under the guise that they were responsible for the anti-government turmoil. But Bahais must also refrain from involvement in partisan politics whether local, national or international. In the spring of 2008, seven Bahai leaders were rounded up during the night and have been held in Tehran’s notorious Evin Prison ever since. Faced with trumped-up charges of “spying for the state of Israel” and “spreading corruption on earth” their fate may be decided at a trial in a Revolutionary Court set for April 10.

Their families and fellow Bahais around the world have good reason to fear what may result should they be found guilty. Some 25 years ago members of Iran’s national-level Bahai leadership were arrested in a similar manner and executed by the Iranian government.

The Islamic Republic of Iran promotes division within its own country by pitting one group against another. To make this policy effective Iran has tried to isolate its people from accurate reporting of the news. According to Reporters Without Borders, the Paris-based organization that promotes freedom of the press, Iran has more journalists in prison than any other country in the world—a distinction it has earned not only by jailing foreign correspondents but also by depriving its own citizens of the freedom of thought and conscience.

Iran, in fact, controls every aspect of its domestic news even down to minor details. Last November the country’s largest circulation newspaper, the Hamshahri, was temporarily closed down after it published a photograph of a Bahai temple in India as part of an advertisement for tourism to that country.

Any kind of criticism, foreign or domestic, only fuels the Iranian Islamic regime’s worst expectations. The government is sensitive to international embarrassment and highly reactive as is clearly shown by its response to ongoing public protests over the Iranian presidential election held last June.

The international community, including the American government, should continue to highlight Iran’s human rights abuses as such global attention makes it more difficult to continue rights violations without being noticed.

That “the earth is but one country and mankind its citizens” is an oft-quoted excerpt from the 19th century writings of the prophet-founder of the Bahai Faith, Bahaullah. Universal human rights and international conventions may not represent global governance, but the recent earthquakes in Haiti followed by those in Chile and just last week the modest quake in Los Angeles, pose an excellent metaphor for global unity and the interconnectedness of nations—what happens in one part of the world affects people living elsewhere.

Whatever happens in the show-trial of seven Bahai leaders in Iran, the larger issue is the fate of the Iranian people. The question is: What kind of nation does Iran aspire to become? Will it remain a repressive society unable to overcome the effects of religious bigotry? Or will it live up to the ideals not only of international human rights but also Islamic standards of justice?

Bahais have the greatest respect for all religions. The sacred writings of the Bahai Faith refer to Islam as “the blessed and luminous religion of God” and Iran, itself, as having a glorious future as a “focal center of divine splendors” to match its proud history of achievement.

In the face of injustice people turn to external interventions. They march in protest, conduct economic boycotts, work to enact various laws, abandon old policies and adopt new ones. Bahais believe that the ultimate struggle for justice in Iran will not be waged in the streets of Tehran, will not be contested in Islamic courts but will, instead, be fought in the hearts of the Iranian people.

AUTHOR
Randolph Dobbs is the secretary of the Spiritual Assembly of the Bahais of Los Angeles and a member of the Regional Bahai Council of the Southwestern States. Along with Amnesty International, Human Rights Watch and UCLA, the Bahais of Los Angeles are co-sponsors of “The Struggle for Human Rights in Iran” a human rights event to be held Monday evening, April 26, at 7:30 p.m. at UCLA’s Royce Hall. The program is free to the public and will feature Roxana Saberi as keynote speaker and Rudi Bakhtiar of Fox News as emcee. Visit struggleforhumanrights.org.