More credit than they deserve 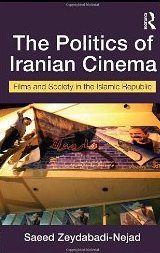 The Politics of Iranian Cinema
Film and Society in the Islamic Republic
Saeed Zeydabadi-Nejad
Routledge, 2010.

REVIEW
As I began reading this book in March 2010, I learned of the imprisonment of Jafar Panahi, a New-Wave Iranian filmmaker, along with several friends and members of his family. This made the subject matter of the book highly topical and quite relevant to today’s political struggles in Iran. Further evidence of this topicality is the fact that Iranian government ministers have lost their posts or were impeached because of films.

We learn from this book about two important genres of Iranian cinema: art films (made for the educated elite and film festivals), and social films. Prominent among the latter category are films about women, increasingly by female directors. Because of the severe restrictions placed on women and their rights, such women’s films are doubly explosive. Discussing women’s issues and women’s films, a prominent Iranian film actress, who is now a director herself, is quoted as saying: “I know many men who are avid readers, are very well aware of what is going on in the world, but when it comes to women, they are extremely narrow-minded. Iranian men are influenced by the culture of this society. There are words that have been handed down to them and they have accepted without question, such as ‘gheyrat’ [jealous zeal] and ‘namus’ [sexual honor]” [p. 136].

We also learn that Iranian cinema before the revolution was star-centered, whereas the postrevolutionary version is identified with the director and/or scriptwriter. The latter make much more money than the actors (not that there is much money in Iranian cinema) and their incomes are often supplemented by book sales.

Iranian films that are not banned outright, are routinely censored, but such censorship is not a new phenomenon. For example, Mehrju’i’s “The Cow” (1969) was released only after the filmmaker agreed to add statements to the film that its story, showing backwardness in Iranian villages, took place before the Pahlavi dynasty.

One interesting dynamic at play in Iranian cinema is a heightened awareness of censorship among all involved. Movie audiences readily figure out which parts of a film have been censored and what might have been removed or altered. On page 89, we read about a ploy of some Iranian filmmakers, who, guessing about which parts of their films will be censored, “have the solution [e.g., alternative dialogs] ready to fix those parts.”

The conservative clergy are torn about cinema and its role. On the one hand, they do not trust the intellectual filmmakers, and on the other, they have come to recognize the power of film as a tool to advance their agenda. While boasting about the successes of Iranian cinema at international film festivals, these authorities view with suspicion the motivation of festival organizers for honoring dissident and intellectual filmmakers.

The author quotes Makhmalbaf, a filmmaker who no longer carries favor with the clergy, despite the fact that his early films met with strong approval, as saying [p. 66]: “Iranians live like people in Los Angeles at home and like Saudi Arabians on the streets. You cannot get to know this society from the streets. If you go to people’s houses, you see the real people.”

My own longstanding criticism of Iranian cinema, which seems to resonate with others (according to the author), is that it has become disjoint from the tastes and concerns of the Iranian people. The efforts of filmmakers to satisfy the censors, on the one hand (improbable story lines, a woman wearing her hejab even when alone with her kin at home, unrealistic dialog), and pandering to the art-film style favored at international film festivals (use of child actors, filming exclusively on location, undue focus on the poor and uneducated), on the other, have rendered the protagonists of modern Iranian films unrecognizable to the average Iranian.

Interestingly, Iranian filmmakers may be given more credit than they deserve, both inside and outside the country. Audiences in Iran sometimes read nonexistent political messages in ambiguities that may have resulted from censorship or poor cinematic execution. Festival critics and foreign audiences tend to view those same ambiguities as signs of sophistication or depth.

To wrap up, this book (the author’s doctoral thesis) is a very useful contribution to the understanding of Iranian cinema and its prominent role in the country’s social and political scenes.