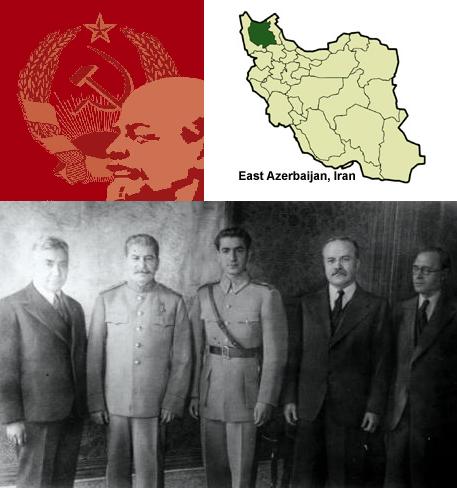 During the three years of occupation, Stalin had expanded Soviet political influence in Azerbaijan and the Kurdish area in northwestern Iran. On December 12, 1945, after weeks of violent clashes a Soviet-backed separatist People’s Republic of Azerbaijan was founded. The Kurdish People’s Republic was also established in late 1945. Iranian government troops sent to reestablish control were blocked by Soviet Red Army units. When the deadline for withdrawal arrived on March 2, 1946, six months after the end of World War II hostilities, the British began to withdraw, but Moscow balked, “citing threats to Soviet security.”

Soviet troops did not withdraw from Iran proper until May, 1946 after receiving a promise of petroleum concessions. The Soviet republics in the north were soon overthrown and the oil concessions were revoked.

Following Germany’s invasion of the USSR in June 1941, the United Kingdom and the Soviet Union became allies. Although a neutral nation, Reza Shah Pahlavi had brought Iran closer to Germany. This concerned the British who feared that the Abadan Oil Refinery, owned by the Anglo-Iranian Oil Company, might fall into German hands — the refinery produced eight million tons of oil in 1940 and was thus a crucial part of the Allied war effort. For the Soviets, Iran was a country of extreme strategic importance. The German Army (Wehrmacht Heer) was steadily advancing through the Soviet Union and there were few ways for the Allies to get desperately needed American Lend-Lease supplies to the Soviets.

With increasing German submarine attacks, as well as heavy ice floes and the coastal ice cap fast rendering convoys to Arkhangelsk impossible, the Trans-Iranian Railway seemed a very attractive route to transport supplies up from the Persian Gulf. The two Allied nations applied pressure on Iran and the Shah but this led only to increased tensions and pro-German rallies in the capital of Tehran. Reza Shah refused to expel the many German nationals residing in Iran, and denied the use of the railway to the Allies; this, along with the above strategic concerns, prompted Britain and the Soviet Union to launch an invasion of Iran on August 25, 1941.

Iranian Azerbaijan is generally considered the northwest portion of Iran compromising the provinces of Zanjan, East Azerbaijan, West Azerbaijan and Ardabil. It shares borders with the Republic of Azerbaijan,[11] Armenia, Turkey, and Iraq and a population of about 10 million. Azerbaijan is famous for its great natural beauty. There are 17 rivers and two lakes in the region. Cotton, nuts, textiles, tea, machinery and electrical equipments are main industries. The northern, alpine region, which includes Lake Urmia, is mountainous, with deep valleys and fertile lowlands.

The region is bounded in the north by Armenia and the Republic of Azerbaijan and in the West by Lake Urmia and Kurdish-inhabited areas of Iran, and in the East by the Talyshstan and Gilan