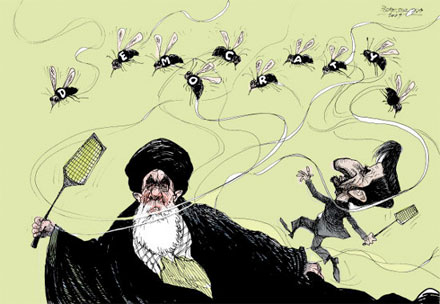 Some months ago, on a bus ride from Edinburgh airport to St. Andrews in Scotland, I was sitting with a British gentleman who was going to the same conference as I was -on the historiography of Iran.  I started talking to him about Iran. He is a historian who teaches in one of the U.S. universities.  His field of study is the Middle East, in particular Iran.  He told me that in a few months he would be organizing an event in honor of the late Ann Lambton, a well-known British scholar of Iran, a woman who traveled Iran by foot and who wrote voluminously about many aspects of the country, ranging from a study on Persian grammar to the history of the Qajar period to land reform under the Pahlavis.

Tall and rugged, Lambton was an intimidating teacher who suffered no fools—as some of her former students told me. She was also a close advisor to the British government and a good friend of Foreign Secretary Anthony Eden. She had told her government not to compromise in any way with the democratically elected Prime Minister of Iran, Dr. Mohammad Mosaddeq.  Dr. Mosaddeq was a secular politician who had studied Law in France and Switzerland. What he saw in the West, the workings of a democracy, impressed him so much so that he wanted to apply it to his homeland.  Mosaddeq had written his Ph.D. thesis on the law of inheritance in the Shi’a religion. He knew the ins and outs of religion and government.  Of Qajar descent, he had grown up in nobility only to reject it. Highly influenced by his philanthropic mother, and raised in a liberal family, he came to realize that democracy was the best form of government for Iran.  He had been imprisoned by Reza Shah for denouncing the latter’s dictatorial decrees, and at the age of 67, he was one of the oldest members of the Majlis. Soon after, by a majority vote, he became the Prime Minister of Iran.

Mosaddeq of course opposed British influence in Iran and in an act of insubordination, nationalized Iran’s oil to the outrage of the British. The subsequent history is well known. Mosaddeq was toppled; the Shah was brought back, giving years of lip service to those who helped regain his throne. But in 1979, Mohammad Reza Pahlavi, like his father before him, was forced to leave the throne. The Iranian Revolution took place and the Imam came back from years of exile in Najaf by way of Neauphle-le-Chateau on an Air France jet.  Millions were cheering while waiting for his arrival in the streets of Tehran. On the plane, the late ABC anchor, Peter Jennings, asked Ayatollah Ruhollah Khomeini how he felt returning to Iran after such a long absence. His reply was, “nothing,” showing a man with no emotions.

Why is looking back at history at this juncture so important not just for Iran but the entire Middle East?  Why is it that the past always comes back to haunt us? Why is it that personalities like Ann Lambton and the role they played so vital in shaping the history of nations like Iran?  Ann Lambton believed that for the British government to make any deals with Mosaddeq was a kiss of death. Like many of her friends in the British foreign office, she was short-sighted and only saw the immediate gains.  She also advised her government to ally with the clergy. The American historian Roger Louis wrote, “While Ann Lambton did not write the blueprint for theocracy in Iran, she did suggest in 1951 that covert means be used to oust Muhammad Musaddiq.  Her first choice as the replacement for the then-still-constitutionally-mandated Prime Minister, being Sayyid Zia Tabataba’i [the original owner of the compound which is now home to the notorious Evin prison],  a pro-British conservative politician.”

Ann Lambton never returned to Iran after 1970; she did not like the Shah’s White Revolution or the outcome of the land reform. In many ways, the government she helped to bring to power disappointed her.  In her obituary, after praising her work as unmatched by anyone of her peers, a scholar who knew the language and the people of Iran, David Morgan writes of his mentor: “The outcome was that Mossadeq was forced out of office by the royalists, with the support of the US and Britain, and imprisoned. Nevertheless, she [Lambton] had little time for the Shah, a disdain that was fully reciprocated; and she was initially sympathetic to the revolutionaries of 1979, led by Ayatollah Khomeini, though soon disillusioned.” In a briefing to the foreign office, Miss Lambton as she was called, had concluded that Americans “lack our experience or the psychological insight” on Iran. Was she right?

Why is Iran going through so much suffering and turmoil? Did foreign politicians and their advisors make mistakes in their judgment or did they know what they were doing? Even though PM Mosaddeq tactically allied with Ayatollah Kashani–the spiritual leader of many of today’s clergymen who later decided to support the Shah–he was a firm believer in the separation of state and religion.  He knew the devastating impact religion could have if it is incorporated into daily life and politics.  He knew that when given power and authority, the clerical establishment, especially the Shi’a, will be the worst kind of statesmen.  When someone proposed Mehdi Bazargan (who later became the provisional Prime Minister after 1979) as his Minister of Culture, he rejected the idea, saying that if Bazargan, because of his religiosity was put in this position, he would put a scarf on every Iranian girl and woman. He respected the late Bazargan who was a man of integrity, but not for that post.  His vision was correct. He had read and lived the history of Iran.

Today, there is a serious discourse among Iranian intellectuals, secularists as well as religiously minded ones, about whether Iran should have a secular government or continue on a more moderate path of religious democracy.  This discussion is even more relevant after the rise of the Green movement. Should a semi- religious state evolve if and when the concept of Velayat-e- Faqih is gone?   I think that advocates of the idea of a religious state, members of Washington think-tanks or scholars, are mistaken to advise their governments that Iran is better off under religious rule. I believe that today, many Iranians, with the exception of the supporters of the hardliners- Ahmadi Nejad, Bassij and the Revolutionary Guards -have lost their love affair with an Islamic state, if they ever had one.

The question we face is what went wrong in Iran? Could the rule of the clerics have been avoided?  And how can we arrive at a consensus on the best form of government for Iran? These questions are pressing both from the perspective of leftist and liberal intellectuals as well as of those religious scholars who believed or still believe that a theocracy or even a semi-progressive religious state can be a viable model of governance.  But more importantly, the impasse remains with the West, notably America and Britain, who have interfered in Iranian politics in various capacities by ignoring and undermining nationalist/ secular forces. They, more than any other Western power, should take the blame for helping Khomeini come to power and throttle an entire society under his reactionary idea of an “Islamic government.”

That is not a conspiracy theory as many of us Middle Easterners are accustomed to believe in but the stuff of reality: if the West had cooperated with nationalist and secular forces in Iran, this tragedy in Iran could possibly have been avoided. But the West was shortsighted; Reagan called the Mujahedin freedom fighters and allied with them against the atheist Soviet Union; today’s Taliban might have never come to power and the Afghan nation might have been spared much mayhem and misery if the Americans had not supported these reactionary forces. In Iran too, in its greed for profit and in its drive to stop the influence of the “left,” the West turned its back on its real and potential partners.  Today, the Iranian saga continues.

Ann Lambton said that she would never go to Iran if she had to wear the hejab.  “I have never worn a chador in my life, and I do not intend to start now”, she said. Lambton maybe resting in peace in her grave somewhere in the English countryside,  but today, the children of Iran are paying the price; most of the times, their graves are not even marked and their women have had to wear the hejab since 1979.