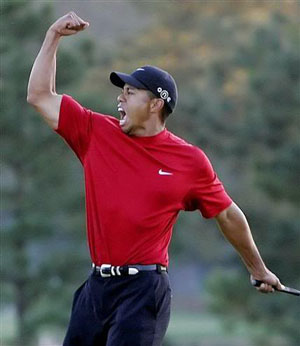 There, I’ve just said what every red-blooded man has been thinking.

The prudish puritanical inconsistency of what is supposed to go for American code of conduct, versus the salaciousness of the “Real World” and the many Americans who have “Gone Wild”, leaves me rather amused.

In a country where we have been accustomed to having our cake and eating it too, instant gratification is apparently also king. Apparently you can be a prude and over indulgent at the same time.

Before I get to El Tigre, let us look at the grand hypocrisy of the politicians in the US. Isn’t it funny (or hasn’t anyone else noticed), how pre-occupied the most “Moral” ones are with morality of others, but when it comes to their own actions they don’t seem to want to follow the rules they’ve laid out for everyone else to follow.

Whether it is all of those fabulously Gay Republicans, bathroom-tapping their way around Washington, stepping on gay rights every chance they get, to the outrageous lifestyle of someone as obviously deluded as Sarah Palin, talking to a Tea-flavored Koolaid drinking America about right and wrong, with a pregnant teenage unwed daughter, offstage applauding Gran’Ma Palin from the wings.

Dual moral standards it seems, is the only American growth industry these days.

Which brings me to Babr-eh Choobi.

Tiger Woods is possibly the most “successful” human being in the history of the planet. By sheer productive output, meaning generating real revenues, Woods as moved far ahead of any single person’s individual capacity to make money. Simply announcing he would participate in the Master’s tournament sent Augusta hotel rates, event ticket sales, TV audiences, and general hoopla, through the roof.

So, while I personally abhor the act of having meaningless sex, and am personally a champion of true, loyal love to only one person (at a time), I find it rather amusing and concerning that the behavior of Tiger is so scrutinized, and the more disturbing behavior of the MANY women who knew full well that he was married, and in spite of his solicitation, agreed to his offer. Eagerly and frequently, apparently.

Point and shake your fingers at Tiger if you must. He is doing what (a) Tiger does. Stalk, Hunt, Kill, Move on to the next one. Whether it is Golf or sex with Hot (and willing) women.

But if you only look for the one Tiger on the loose, you are failing to see that apparently the Cougar population is completely out of control.