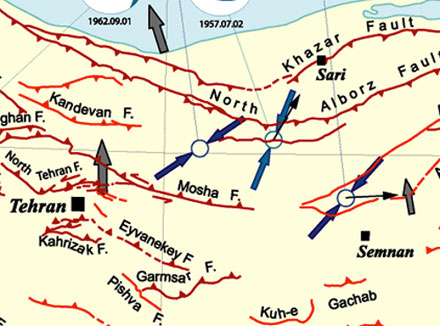 Tehran’s probability to have an earthquake is quite high due to some major fault lines going across the city based on many national geotechnical projects done in this field.

The very densely populated metropolitan is the home of an estimated 13 million people and day-population of 15, is fully covered with seismically hazardous buildings.

Before reinforcing the building seismic codes, buildings were built with no provisions of earthquake proof structures.

After the seismic codes’ entrance into the building codes, however, many buildings not complying to code could go through Tehran’s Building Department plan check process and get approved with some “under the table” money. Meaning the corrupted city’s Building Department could be bribed into disregarding the codes’ obligation helping the developer get away with not spending a considerable amount of money towards the structural reinforcement. This is the era when mass-developers who were at the time called: “Build and Sell” (Besaaz-o-Befroosh) were instead named “Build and Run-away” (Besaaz-o- Dar ro) and managed to make astronomical figures in cash. As a result, unfortunately, now a good majority of buildings in Tehran is built by the same type of developers with the help of a mismanaged and corrupted City Building Department.

In the most crowded streets of Tehran, you can see huge slabs of granite attached to the façades of towers by only a handful of cement on the top floors which in case of even the weakest earthquake would get detached and act as a guillotine on their way down to the ground on the very busy sidewalks. Sadly enough, the process still continued during when Ahmadinejad was the mayor of Tehran, even though he namely holds a PhD degree in Civil-Strcutural engineering. Apart from that, Tehran has no crisis plan in case an earthquake happens and all the city’s infrastructure will be in ruins making it impossible to send help to the damaged areas with no alternatives provisioned either.

When Ahmadinejad became the President there were no words or suggestions as how to approach the probability of such a disaster in a city once he was a mayor of and the Capital of Iran.

During the post-election events Tehran was the heart of the protests. Initiating rallies in huge numbers and acting as a model for other big and small cities of Iran with a concentration of most of the top universities and political, civil, cultural and economic organizations and a great magnet for young people coming to Tehran to either work or study.

About two weeks ago, Ahmadinejad all of a sudden brought up the earthquake subject, suggesting that at least 5 million people should evacuate the Capital to avoid the quake and emigrate to the less-prone cities. Following him, Sadegh Mahsouli, Minister of Welfare and Social Security Sadeq Mahsooli said prayers and pleas for forgiveness and to avoid sins were the best “formulas to repel earthquakes.”

The story continued with last week’s Friday prayer by Hojat-ol-Eslam Sedighi claiming that if an earthquake in Tehran leaves everybody under rubble Iranian women who are not dressing modeslty and misleading men into extramarital relationships will be to blame. This is while Iranian women in Iran do not have the option of choosing how they dress out of their homes and have to obey the Islamic codes of dressing anyhow.

This week’s Friday prayer, Ayatollah Janati declared that with praying and asking for God’s forgiveness it would be possible to avoid or postpone earthquakes. And that this is the kind of opportunity that only true believers in God have and nobody else does. — Helaleh Farahbakhsh