The Question of Violence 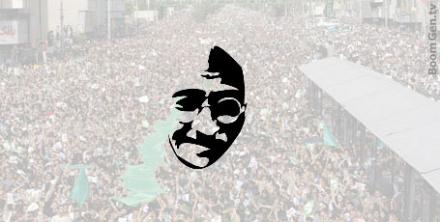 In his article “An American in Tehran”, Matthew Cassel would have us believe that Iran’s infamous Basij paramilitary force has gotten a bad rap.

He interviews a Basij member while in Iran and portrays him in the most sympathetic light:

I tried to picture this timid young man on the back of a motorcycle with a club in his hand, bashing the heads of other young Iranians. After he warmed up a bit and asked me for a cigarette, my friend insisted that he lift his pant leg. When he did so, I saw a freshly healed bullet wound just below his knee. “Mousavi supporters did this,” my friend said.

I looked to the young Basij member. “Mousavi?” I asked him, and pointed to the wound. “Yes. See, you don’t know anything!” my friend shouted. “It wasn’t like what you saw outside.” He smiled at the fact that the televised street battles had not been as clear-cut as I believed.

This passage is remarkable in a several ways. First, for the author’s utter credulity. Cassel doesn’t pursue the matter—he dutifully quotes the Basiji and another Iranian whom Cassel describes as his (Cassel’s) friend, and leaves it at that. Though he doesn’t say explicitly whether he believes the claim to be true or not, the thrust and implication are clear enough. Cassel pointedly gives his “friend” the final word on the matter: “He smiled at the fact that the televised street battles had not been as clear-cut as I believed.”

Why did it not occur to Cassel to check this story out—to run it by a few people who know the contemporary Iranian scene better than he does, or to match it against the vast documentary record of the post-June 12 Iranian landscape? Had he done so, it would have provided a healthy sound-check to counterbalance the agenda of the Basiji and Cassel’s “friend” and would have cast this dubious episode in a rather different light. It’s revealing that Cassel saw fit to do none of the above, and instead displayed a striking degree of credulity in the face of a story that simply defies belief.

Whatever else one may think of Iran’s Green movement, among the things that has most distinguished it is the nonviolence at its tactical and philosophical core. Farhang Jahanpour considers the movement’s “attitude to violence”—which he characterizes as “the very antithesis” of the regime’s—among its principal achievements. The Green movement, he notes, “does not use force against force; its strength lies in peaceful resistance, even in the face of brutal atrocities.” This is both a matter of principle and a pragmatic consideration, Jahanpour observes, for Iran’s Greens

realize that they cannot match the regime’s instruments of violence (its armed forces, Revolutionary Guards, police, plainclothes thugs and basij). But the movement’s non-violent opposition is also a potent weapon, for it exposes the lawless core of a regime that believes ultimately only in its own power. This has robbed the regime of its legitimacy in the eyes of a growing number of people, even among the religious classes.

If Iran’s Green movement has a godfather, the Iranian religious thinker Abdulkarim Soroush recently said, it is Gandhi: “We are insisting adamantly that democratic, nonviolent change is at the heart of this movement.” Echoing Soroush, the Iranian philosopher Ramin Jahanbegloo has called the post-June 12 period “a Gandhian moment in Iran.” “Iranian public discourse has changed by drinking deeply from the well of nonviolence,” he observes, pointing to parallels “between the civil disobedience movement in today’s Iran and successful nonviolent movements led by Gandhi in South Africa and in India.”

The websites of Human Rights Watch, Amnesty International, and the International Campaign for Human Rights in Iran make it abundantly, and painfully, clear which side has engaged in the overwhelming majority of the violence in Iran since June 12 2009. Only one side has the guns, and it’s not the Green movement. Since June 12, the Islamic Republic has unleashed its repressive state apparatus on peaceful demonstrators, killing dozens, injuring hundreds, arresting thousands, and subjecting those behind bars to torture and rape.

Yet Cassel sympathetically portrays the agents of that repressive state apparatus as victims of a putatively violent resistance movement that, we are to believe, inflicts bullet wounds upon the “timid” young souls in the government security forces!

I found this passage so stupefying that I felt the need to run it by some friends on the Iranian Left to get their reactions. One of them was Hamid Dabashi, professor of Iranian Studies at Columbia University, columnist for Al-Ahram, and author of several books on Iran. Dabashi regards the story of the Basiji bullet wound as “propaganda” aimed “to discredit a grassroots civil rights movement”:

The piece is a complete sham. What filmmaker? What name? [Cassel] quotes an unnamed individual about an unnamed Basiji having produced a mysterious bullet wound. The defining moment of the Green movement is its nonviolent disposition, in which scores of Basijis have been seen to be embraced with love and as brothers the instant they refuse to beat and harass peaceful protestors.

I also sent the article to Homayoun Pourzad, an organizer with the Network of Iranian Labor Unions, in Iran. Like Dabashi, Pourzad found the bullet wound passage in Cassel’s article incredible. The regime, he pointed out,

has been working feverishly to label the democratic opposition as criminal, violent and dangerous. They would have loved to show the wounded leg of this Basiji as evidence of their claims. Why has it escaped their attention to highlight the bullet wound of this fellow until now? We in the Green movement challenge Cassel to bring his friend to any impartial international observer anywhere in the world.

Speaking of Iran’s labor movement, there’s a conspicuous absence in Cassel’s piece: for an article in a progressive magazine like In These Times (home to a distinguished and vital labor blog) by a writer who sounds decidedly progressive (his author bio says he “worked with various human rights organizations in occupied Palestine before starting a media school for youth in a West Bank refugee camp”), where are the voices of Iranian trade unionists? Wouldn’t a progressive journalist naturally want to talk to trade unionists and consider their perspectives?

Cassel doesn’t even mention the existence of Iran’s trade unionists, let alone include their voices in his story. But that makes sense, since their voices would have complicated Cassel’s narrative. And that’s because Iranian trade unionists are united in their opposition to Ahmadinejad’s reactionary policies, both economic and political: they oppose his neoliberal privatization schemes and his brutal repression against the labor movement and all forms of independent working-class organization.

Instead of interviewing a labor organizer, Cassel trots out the tired canard that the Green movement is a creature of the privileged elite while Ahmadinejad is a hero of the downtrodden masses: “”[I]n the city’s working-class areas, I found another Iran. Few felt the need to criticize the government. … This is the sort of place from which Ahmadinejad … draws his support. He appeals largely to religious conservatives and people who, like him, come from less-privileged backgrounds.”

It’s sad how many leftists have fallen for this vile distortion. Cassel presents his “reporting” as a corrective to what he and his pro-Ahmadinejad friends regard as western media myths about Iran, yet Cassel himself has reproduced a series of shallow clichés all too typical of a particular kind of western observer. As the Iranian journalist Nasrin Alavi recently put it in the New Internationalist:

A simple glance at the background of Iran’s prominent student leaders tells you that, by and large, they are not the children of affluent citizens of north Tehran, but instead come from provincial working-class families or are the children of rural schoolteachers and clerks. The Western media cliché of an opposition limited to the urban upper class belies the current realities. These future leaders of Iran commonly hail from the very heartland of Ahmadinejad’s purported support base.

The call was heeded by around a million people — the conservative mayor of the capital put the number at three million. The scene was reminiscent of the rallies held in the same square during the 1979 revolution. … The rally drew all kinds of protesters: old and young, professionals and workers, bazaaris and students, women with sunglasses and headscarves as well those with the full-length chador. Lines of protesters nine kilometres long converged on the square from the northern, better-off districts as well as from the southern, working-class ones.

Ahmadinejad had described those Iranians who questioned the official election tally as “specks of dirt.” Poignantly, one elderly man at the rally carried a sign that read “I am not a speck of dirt, I am a retired teacher.”

In a final attempt to discredit Iran’s Green movement, Cassel brings up Mousavi’s tenure as the Islamic Republic’s prime minister in the 1980s, when he “oversaw the imprisonment and execution of thousands of leftists and other opposition figures.” Mousavi’s political biography is an entirely legitimate issue to raise. Indeed it has been the subject of heated debate by many an Iranian leftist of the revolutionary generation. But Cassel’s deployment of this issue is a spectacular case of pretzel logic. As Pourzad, the Iranian labor organizer, explains, Mousavi as prime minister “was not in charge of the domestic repressive apparatus—that was controlled by what has become of today’s leadership of the Revolutionary Guards and the Intelligence Ministry (then called the Revolutionary Committees).”

And today’s leadership of the Revolutionary Guards and the Intelligence Ministry are the stronghold of none other than Ahmadinejad and his hardliner faction of the regime. One of the defining impulses of that ultra-reactionary faction has been its drive to reprise the Islamic Republic’s early years of repression and terror. Ahmadinejad pines for a return to that precise period and has in fact recreated it in his crackdown on dissent, his repression against the labor movement and imprisonment of its leaders, his banning of newspapers and magazines, and his show trials and tortured confessions. Yet Cassel portrays Ahmadinejad in a sympathetic light while attacking Mousavi’s years as prime minister.

Let’s see if we have this right: Cassel holds Mousavi responsible for the Islamic Republic’s reign of terror against leftists in the 1980s, when (1) Ahmadinejad’s faction of the regime, which directly carried out that bloodbath, escapes any culpability for this horrific episode; and (2) Ahmadinejad has, over the last four years, carried out a massive crackdown on trade unionists, independent journalists, dissident intellectuals, and women’s rights activists (among others), but Cassel has no problem with this—at least none he cares to mention.

It would be maddening to see the Iranian political landscape turned upside-down and presented through this distorting lens in any publication. But to see it in In These Times, I must say, is particularly sad.

In closing, I would urge readers to pursue these issues with the aid of the following articles:

•Saeed Rahnema, “The Tragedy of the Left’s Discourse on Iran”

•Hussein Ibish, “How Arabs and Iranians Misread Each Other’s politics”

•Ali Moazzami, “The Mirage: What Do People in Poorer Districts Think of Ahmadinejad?”