HISTORY OF IDEAS: Seneca on Anger – A Guide To Happiness with Alain de Botton (BBC) 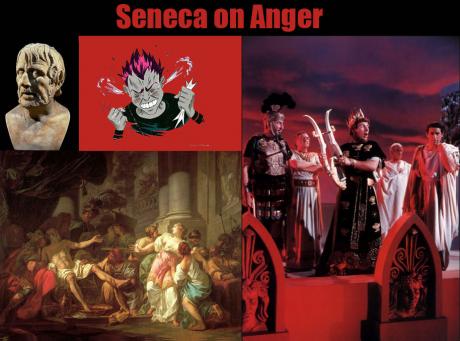 Alain de Botton makes Philosophy easy to understand. Here he speaks about Roman Philosopher Lucius Annaeus Seneca on his views on Anger. Seneca was a tutor and later advisor to emperor Nero, who according to history was responsible for the burning of Rome in a feat of Megalomania and anger.

Seneca on Anger – A Guide To Happiness with Alain de Botton (BBC):

Nero ( Peter Ustinov) Sings to everyone’s boredom but himself:

Early Christians fed to the Lions by Nero:

Lucius Annaeus Seneca (often known simply as Seneca, or Seneca the Younger) (c. 4 BC – AD 65) was a Roman Stoic philosopher, statesman, dramatist, and in one work humorist, of the Silver Age of Latin literature. He was tutor and later advisor to emperor Nero. He was later forced to commit suicide for complicity in the Pisonian conspiracy to assassinate this last of the Julio-Claudian emperors; however, he may have been innocent.His father was Seneca the Elder.

Works attributed to Seneca include a dozen philosophical essays, one hundred twenty-four letters dealing with moral issues, nine tragedies, a satire, and a meteorological essay. One of the tragedies attributed to him, Octavia, has been argued as having been written by another. His authorship of another, Hercules on Oeta, has been questioned, though not to the extent of the Octavia..

Seneca generally employed a pointed rhetorical style. His writings contain the traditional themes of Stoic philosophy: the universe is governed for the best by a rational providence; contentedness is achieved by a simple, unperturbed life in accordance with nature and the duty to the state; human suffering should be accepted and has a positive effect on the soul; study and learning is important; et cetera. He emphasized practical steps by which the reader might confront life’s problems. In particular, he considered it important to confront the fact of one’s own mortality. The discussion of how to approach death dominates many of his letters.