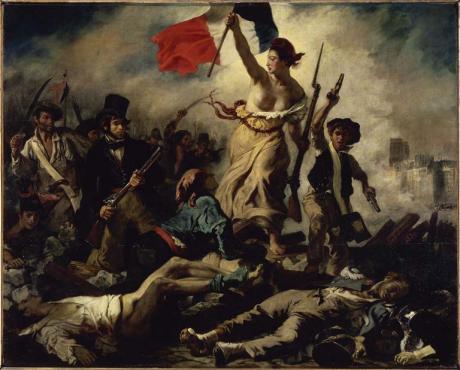 After Reading about the Boobquake Day I was reminded of Eugène Delacroix’s famous painting “Liberty Leading the People “. A woman personifying Liberty leads the people Baring her bosoms. Not that she is wearing the Phrygian cap ( Imported from Persia by the Romans when they fought against their Mightiest Foe: The Parthians).

The Private Life Of A Masterpiece – Liberty Leading The People

Liberty Leading the People (French: La Liberté guidant le peuple) is a painting by Eugène Delacroix commemorating the July Revolution of 1830, which toppled Charles X. A woman personifying Liberty leads the people forward over the bodies of the fallen, holding the tricolore flag of the French Revolution in one hand and brandishing a bayonetted musket with the other. This is perhaps Delacroix’s best-known painting, having carved its own niche in popular culture.

He depicted Liberty, personified by Marianne, symbol of the nation, as both an allegorical goddess-figure and a robust woman of the people, an approach that contemporary critics denounced as “ignoble”. The mound of corpses acts as a kind of pedestal from which Liberty strides, barefoot and bare-breasted, out of the canvas and into the space of the viewer. The Phrygian cap she wears had come to symbolise liberty during the French Revolution of 1789.

The fighters are from a mixture of social classes, ranging from the upper classes represented by the young man in a top hat, to the revolutionary middle class or (bourgeoisie), as exemplified by the boy holding pistols (who may have been the inspiration for the character Gavroche in Victor Hugo’s Les Misérables).What they have in common is the fierceness and determination in their eyes. Aside from the flag held by Liberty, a second, minute tricolore can be discerned in the distance flying from the towers of Notre Dame.

The identity of the man in the top hat has been widely debated. The suggestion that it was a self-portrait by Delacroix has been discounted by modern art historians.In the late 19th century, it was suggested the model was the theatre director Etienne Arago; others have suggested the future curator of the Louvre, Frédéric Villot; but there is no firm consensus on this point.

Ferdinand Victor Eugène Delacroix (26 April 1798 – 13 August 1863) was a French Romantic artist regarded from the outset of his career as the leader of the French Romantic school.Delacroix’s use of expressive brushstrokes and his study of the optical effects of colour profoundly shaped the work of the Impressionists, while his passion for the exotic inspired the artists of the Symbolist movement. A fine lithographer, Delacroix illustrated various works of William Shakespeare, the Scottish writer Sir Walter Scott and the German writer Johann Wolfgang von Goethe.

In contrast to the Neoclassical perfectionism of his chief rival Ingres, Delacroix took for his inspiration the art of Rubens and painters of the Venetian Renaissance, with an attendant emphasis on color and movement rather than clarity of outline and carefully modeled form. Dramatic and romantic content characterized the central themes of his maturity, and led him not to the classical models of Greek and Roman art, but to travel in North Africa, in search of the exotic.Friend and spiritual heir to Théodore Géricault, Delacroix was also inspired by Byron, with whom he shared a strong identification with the “forces of the sublime”, of nature in often violent action.

However, Delacroix was given neither to sentimentality nor bombast, and his Romanticism was that of an individualist. In the words of Baudelaire, “Delacroix was passionately in love with passion, but coldly determined to express passion as clearly as possible.”

DECISIVE BATTLES: The Battle of Carrhae between Parthia and Rome in 53 BC