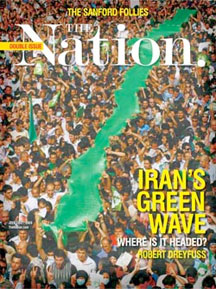 In its desire to build citizen to citizen contacts as a prelude to promote official dialogues and ultimately establish a normal diplomatic and commercial relation with the U.S., the Iranian government threw its doors open on U.S. individuals and groups who appeared wanting to allay the differences between the two countries.  Although the majority of the peace groups and activists who visited Iran were well-intentioned, there were quite a few who were motivated by the idea of supporting certain political trends against the Iranian government.  These individuals and groups were more interested in furthering the U.S. foreign policy objectives in Iran and the Middle East by empowering the pro-U.S. non-governmental organizations (NGO’s), than promoting genuine peace and friendship between the two nations.

Among others, one such individual has been Robert Dreyfuss of the Nation magazine, a social democratic publication that gained its place and reputation in the ’60’s, during the U.S. war on Vietnam, by being acutely anti-Soviet Union.  In his report of last year’s trip to Iran, right before the tenth presidential election, Dreyfuss manifested his utmost revulsion towards the masses of people who expressed their support for President Ahmadinejad and felt sympathy towards the supporters of the pro-western leading contender and his supporters.

In the June 9th, 2009 issue of the Nation, Dreyfuss reporting from Tehran, characterized a pre-election rally of “tens of thousands of Ahmadinejad supporters,” wearing red-armbands, in contrast to Mousavi’s green emblem, as “a virtual fascist movement”.  To fully satisfy his thirst for revulsion towards Ahmadinejad, he went on to call the president’s 50,000 young followers in a gathering as “a lumpen-proletariat crowd of roughnecks and fascists.”  These repugnant words have dripped from the pen of a reporter who has laid claim to the mantle of “peace activist”, a human rights defender and a friend of the American Iranian people.  As they say, with friends like that, who needs enemies.

The social and class instinct of Nation’s Robert Dreyfuss surfaced so clearly when he attended a pro-Mousavi rally.  Instead of hearing “Down with the U.S.”, a usual outcry in pro-Ahmadinejad rallies, he hears the call for “Death to Potatoes”, alluding to the President’s initiative of giving out sacks of potatoes and flour to the poor and working class families who appreciate the government’s welfare program.  In his report, Dreyfuss showed so many feelings of affinity towards Mousavi supporters where women wore  “attractive make up and pink lipstick, and below their short outer garments” were “visible jeans and, in many cases, high heels.” (sic)

Our American investigative reporter fell so much in love with Mousavi supporters that he began predicting the outcome in favour of Mousavi and the demise of Ahmadinejad, well before the election had begun, without a hesitation in his fantasy world, he began building an inflated and imaginary picture in which the rich, thoroughly groomed, pro-western and stylish, just like the guests in the Republican National Convention (RNC) and the Democratic National Convention (DNC) are bound to win the elections.  He even misled his readers in New York by inventing facts about “rumors that the leader, Ayatollah Ali Khamenei, is having second thoughts about the President, too.”  He got so much carried away by his own imagination that he wrote “One well-connected mullah, Sheikh Ahmad Karimi, who is working in the Mousavi camp, told me (him) that the vast majority of Iran’s approximately thirty or so Grand Ayatollahs support Mousavi.”

Such rumors were not in short supply.  Among the false information spread via wrongful reporting, doctored pictures and twitter images then forwarded by bloggers were as follow: that three million protested in Tehran (it was more like a couple of hundred thousand); that the opposition candidate Mir Hossein Mousavi was under house arrest (perhaps he had stayed home where things were ‘safer’); that the president of the election monitoring committee declared the election invalid (a total fabrication).

Dreyfuss’s libelous poison is even more pronounced a full year after his dire predictions against President Ahmadinejad failed to materialize.  No doubt deeply pained at the failure of his beloved “Green Movement” to effect ‘regime change’, in the recent on line Dreyfuss Report for The Nation, demonstrating his remarkable ability to stoop to the lowest possible level in cheap tabloid reporting, Dreyfuss again goes awry in his 4/22/10 post: Depopulating Tehran.  His outright anti-Islamic insults are tinged with racist stereotyping: “…the vast, unwashed clergy of Iran”.  This was only a prelude to the real political issue burning Dreyfuss – that the Islamic government did not ‘fracture/split and fall’, as he has been wildly imagining, so he is forced to dribble: “But the regime is desperately trying to eliminate the threat to its survival that emerged last summer, and there shouldn’t be any doubt that a regime whose political base is in the rural areas and small towns would dearly love to eliminate Tehran’s middle class.”  Yes, Mr. Dreyfuss, you do sound psychotic!

Readers should take the time to appreciate the numerous intelligent, factually based responses among the more than 74 Comments to the article answering his swamp of allegations.  We wonder whether it is The Nation using Dreyfuss or vice versa, Dreyfuss using The Nation in fabricating this news on Iran.

The question that remains to be answered is who does Robert Dreyfuss know in the Iranian government diplomatic circles in the U.S. who issue him visas so frequently and facilitate his numerous trips to Iran on one hand, and his meetings with the highest authorities of the Iranian diplomatic corps whenever President Mahmoud Ahmadinejad attends the annual opening meeting of the United Nations General Assembly?  A simple and rudimentary inquiry on the internet into the background of this so-called “independent” journalist would have shown that Robert Dreyfuss in his book entitled “Hostage to Khomeini” has anticipated that Ronald Reagan’s victory in the Presidential election would provide an opportunity “for the entire Khomeini regime to be swept away by 1981 and replaced with a government of sanity.”

In his article, “The Nation’s man in Tehran: Who is Robert Dreyfuss?” Bill Van Auken on June 22, 2009 wrote that “Dreyfuss held the title of ‘Middle East Intelligence Director’ for Lyndon LaRouche’s Executive Intelligence Review, the flagship publication of what the Washington Post described in 1985 as a network which “had more than 100 intelligence operatives working for it at times, and copies the government in its information gathering operation.”  Furthermore, Iran’s diplomats should have been informed that Robert Dreyfuss has written extensively in support of the so-called “Green Movement”, the post-presidential election in Iran and against the legitimacy of the election and especially the supporters of Ahmadinejad.

AUTHOR
Ardeshir Ommani and Kazem Azin, Iranian born activists residing in the U.S.A. are on the Executive Board of the American Iranian Friendship Committee (AIFC), which promotes peace and dialogue between Iran and U.S., and defends the Islamic Republic from aggressive plans by U.S./Israel.  They can be reached at AIFC@optonline.net