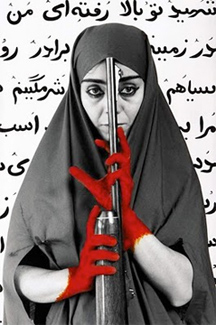 Whilst Iranian women struggle for an affirmation of their status as equal citizens and are demanding withdrawal of discriminatory laws against them, the United Nations elects the country’s totalitarian regime to its Commission on the Status of Women (CSW). The conditions under which the Iranian women live, have enough grounding for the United Nations to call the regime in Iran on their gender apartheid; instead they have promoted IRI to a seat on CSW. When the laws of a totalitarian regime are supported and legitimized by the international community they will have a direct effect on the perpetuation of injustice, as well as continuation of segregation in the society. This in my opinion is justifying more domestic violence.

Sadly what we witness first hand is that Iranian women’s suffering is underestimated by the United Nations recent act. They seem to treat this primarily as a fictionalized case. But these are not the reasons why I write this note. I am writing this because a few days ago I read an article by an Iranian women’s rights activist named Shadi Sadr. In that article Sadr makes several statements against Iranian men and compares them all with the totalitarian regime’s Imam, Ayatollah Seddighi, a man who called women the reason for earthquakes in his Friday sermon, and represents a regime that arrests, rapes, and kills.

Iranian men unfortunately are once again victims of stereotyping and this time not by the American Betty Mahmoody in a movie called “Not without My Daughter” but in Sadr’s article titled “What is Different between Tehran’s Friday Sermon Imam and the rest of Iranian Men?”. The image she has portrayed of Iranian men in her article is misleading. Without raising objection to the original comments and minimizing the Ayatollah’s statement she takes Iranian men to a kangaroo court and denies them all due process rights. Based on Sadr’s statement half the population of the country is guilty of sexual harassment as well as mischievous behavior against Iranian women. Where is the logic in such a comparison? Those men are mostly innocent of the crimes Sadr is convicting them of. After all Iranian men are not a bol de soupe that everything could go in. This is simply wrong.

But then some may say I question Sadr’s motives in writing such an article because I have not been victimized or assaulted in the streets of Iran. I assure you that will be a failing argument. Like some Iranian women I too have experienced that type of vulgarity in the streets back in Iran, i.e. age 9: a young man grabbed my bosom as I walked with my mother and brother, age 13, covered in the mandatory Hijab and walking to school a man came close to me and said: “I want to eat your pussy,” at age 14 I was harassed by a Basiji on several occasions. In his last attempt he pushed me against the wall and pressed himself against me. Whatever our personal experiences may or may not be, we can not deny men’s rights by collectively putting them all in the same camp as the Imam.

Although subjects such as women’s oppression in Iran and gender apartheid are important issues to be raised and discussed, none should admonish us to forget that most Iranian men support Iranian women in their struggle to gain equal rights. We need to acknowledge the difference between the totalitarian regime’s men and the Iranian male population. There’s no room for bias in women’s movement that is supposed to be fighting against bias!