The actual value of rial is roughly 25000 per dollar 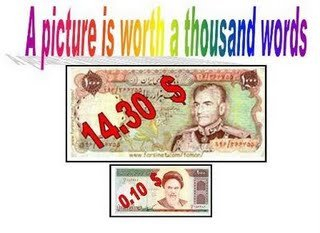 by all credible accounts. The controlled rate is hovering around 10000-11000 and even this on a never ending downtrend even during the past 10 years or so (minus the financial crisis period where dollar is safe haven still) when dollar has declined against all major currencies. Once at full float maintaining the trade balance and the domestic costs of fixed expenditures will explode first before the economy and population does. This costs that are essentially politically and ideologically motivated and have little relevance to real economics were forecast to explode around 2011-12 based on the trajectory of events with a significant component being oil as it is 80% of the economy (the same that inflates all Iran’s numbers including PPP because of the ever ascending oil price minus occasional blips). There is no reason to believe that timeline will change significantly. The only thing that can delay or stop that is an astronomical rise in price of oil and hence influx of liquidity. This is also part of the reason IRR has taken a belligerent stance that on the surface makes no political or common sense.  U.S. on the other hand is doing all it can to keep the oil prices low for several reasons but is internally conflicted because of oil interests and a significant portion of that market now under Chinese and Russian influence. Both allies of IRR because they know this regime will give away anything to maintain the 2 key allies, or else. This is in addition to the Russians selling their outdated and outmoded nuclear junk, along the plotting of rearranging the Oil/Gas map of the region and taking even more of Caspian sea control and reserves (never mind that everyone minus Iran is now benefiting from Gas reserves as well as Oil (google related items and sites). China, in addition to getting cheap oil and dumping its junk in Iran, along with several others including Korea & Japan are beneficiaries of expanded export markets because the Import centric policy essentially favors imports over domestic production. One would think this is non-sensical even for IRR. But this import driven approach, keeps partners happy and in-leverage and simultaneously allows for increasing control of Sepah and their allies in bazar to take full ownership of the economy. This jives with the reported take over of projects as foreign firms leave due to embargo. The claims and boasts of IRR aside, they won’t be able to cover the technological vacuum as they have not been able to before, or even the investment flow. Meanwhile, as I mentioned in an earlier comment, the Oil production capacity is not about to go up, there is no meaningful gas exploration to speak of, and the nation’s industrial base is paralyzed or mal-nourished and will be further so as the hyper-inflationary forces kick in, while exorbitant fixed costs can’t be done away without a massive backlash. That is called stuck between a rock a hard place. Mousavi/khatami et al with all their flaws were quasi-technocrats and to the extent that any government can be accounting based within the islamic republic context, they were. Now, this is AN/Sepah ala Kim Il Jung with a religious erteja’ mixed in where sanity, logic and normalcy are all western and imperialist, and hence, evil. The Western masters that unleashed this beast on Iran, have decided the expiration time has come but are too thinly spread to engage another war. At least yet.  And there is nothing more dangerous than a cornered beast. IRR calculation is simple. It is now or never and here or nowhere. So, the more radical and fearsome, the better. Everything else is secondary. The normal rules of human conduct no longer apply. Let alone statistics and information.

I had mentioned this in a blog a while ago but defeating IRR is a key step in countering global fascism & extreme capital. And the Iranian people, perhaps as a matter of destiny, are at the front line of this war.

What IRR has accomplished in the past 31 years is bring Iran ever closer to abyss. Culturally, financially, morally, politically and now militarily. And our enemy is not just IRR but the whole criminal enterprise that ushered them in. This leach was designed to suck our blood and it has been the most sophisticated and successful creation of the imperialism so far. Yes the same imperialism that is IRR’s battle cry.