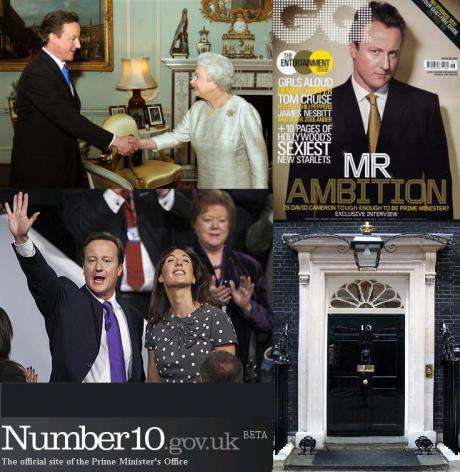 Britain’s Queen Elizabeth II greets David Cameron, the leader of the Conservative Party, at Buckingham Palace, London, in an audience to invite him to be the next Prime Minister of the United Kingdom, following last week’s General Election, Tuesday May 11, 2010. (AP Photo/John Stillwell, Pool).

He shares the namesake of Persian Top Model Cameron Alborian, yet he is not a Yoga Instructor but the New British Prime Minister. Greeted by Queen Elizabeth, David Cameron broke the Protocole by merely shaking hands instead of the traditional bow and kissing his sovereign’s hand. A Sign of Times ? Or the British Monarchy’s amazing capacity to adjust itself to each new generation ? …

The Queen and the Prime Minister ( Documentary made during  Tony Blair’s Premiership):

David Cameron Announces The Queen Has Appointed Him Prime Minister:

Cameron Alborzian-British Iranian Top Model and Yoga Instructor- Who to Vote For ?:

Did Obama Bow To the Queen Of England? :

Heated debate in Parliament: Brown vs. Cameron debate over the Inheritance Tax during Queen’s Speech debate:

Parody: God Save the Queen vs anarchy in the uk ( Sex Pistols):

PARLIAMENTARY DEMOCRACY: Should Australia Or Canada Become a Republic ?