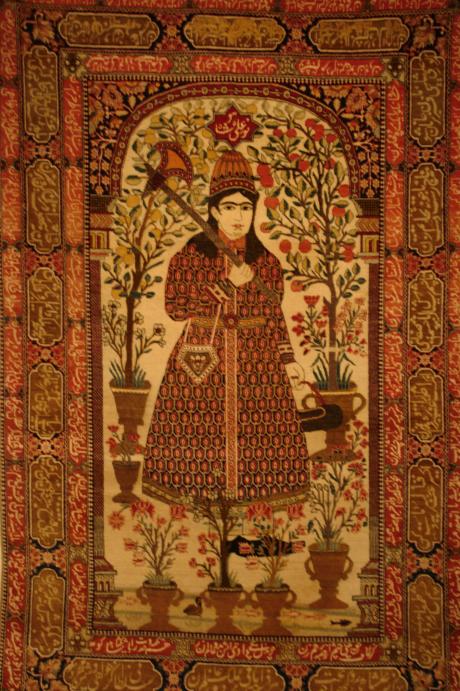 Over the past couple of years, I have been reading and following the debates that have surrounded Azar Nafisi’s Reading Lolita in Tehran. I just finished reading Bahmani’s blog Stop Reading Lolita in Tehran. Although I agree with Bahmani and all the other debates that have surrounded this book, particularly in relation to the representation of the Iranian women and the allegories that the book draws on the Iranian women and Lolita, I have to draw everyone’s attention on the representation of the Iranian man in the book. I believe that this book–and all the other so called feminist books emerging from the Middle East that address the issues of women–are also in a way constructing and forming a specific image of the Iranian man and Iranian (and Middle Eastern) masculinities that is repeating and confirming a certain negative image of the Iranian man in the West, leaving very little room for the Iranian man to be identified as a human being with feelings.

RLT, at first glance, promises ‘us a rare glimpse, from the inside, of women’s lives in revolutionary Iran,’ offering us very little about the Iranian man. However, I believe that if this book is read contrapuntally, that is as Edward Said puts it ‘with an effort to draw out, extend, give emphasis and voice to what is silent or marginally present or ideologically represented,’ I believe that it is also a book that offers us a glimpse into the mannerisms and characteristics of the Iranian men. Here I wish to locate and extend the marginal presence of the Iranian men in RLT, in order to understand how that marginality has shaped much of our understanding of him. But, as Said reminds us, because ‘each cultural work is a vision of a moment,’ located and received within a specific socio-political and cultural setting, reading contrapuntally does mean reading the marginal in the vacuum of its marginality; rather when approaching the text we ‘must open it out both to what went into it and to what its author excluded.’ This means that in locating and contextualizing the marginality of the Iranian men in RLT, we must first have a clear understanding of what the text represents about the Iranian women, as well as the socio-political, historical and discursive framework into which it is received.

A quick glance of what RLT does represent, reveals a gloomy and strictly gender-dichotomous fundamentalist society. In this society, women, represented by the seven girls who attended Nafisi’s private book club, live under constant fear of their domineering brothers, fathers, or other male family members in private, and in public are ‘subservient to politics and subject to the arbitrary rules,’ of the society which dictates their every action, from who they interact with to what they wear. Nafisi sets up this position through the girls in the very first day of the book club, when she introduces each girl in relation to the difficulties she has had with her male family members to get herself to that first session. For instance, Sanaz is seen running into Nafisi’s house for the first session of the book club looking ‘harassed, as if she had been running from a stalker or a thief,’ after her younger brother ‘the darling of their parents,’ who had ‘taken to proving his masculinity by spying on her, listening to her phone conversations, driving her car around and monitoring her actions,’ had dropped her off with disapproval. Another girl, Nassrin, reveals in a conversation with Nafisi how she could finally make it to the book club: ‘I mentioned the idea [of attending this book club] very casually to my father, just to test his reaction, and he vehemently disapproved. How did you convince him to let you come? I asked. I lied, she said. You lied? What else can one do with a person who’s so dictatorial who won’t let his daughter at this age, go to an all-female literature class?’ A few weeks into the book club, Nafisi writes, ‘Sanaz’s brother was by now…one of a series of male villains who resurfaced from week to week.’ As the sessions proceed, in each session men are vilified in various accounts and each girl reveals more of her fear of her male family members. Nassrin, for instance, eventually reveals how ‘her youngest uncle, a very devout and pious man, had sexually abused her when she was barely eleven years old. She recounts ‘how he used to say that the he wanted to keep himself chaste and pure for his future wife and refused friendships with women on that count….He used to tutor Nassrin…three times a week for over a year. He helped her with Arabic and sometimes with mathematics. During those sessions as they sat side by side at her desk, his hands had wandered over her legs, her whole body, as she repeated the Arabic tenses.’

In Nafisi’s descriptions, it is not only in the private domain that these male villains pop up. In the public domain Iranian women are under religious and political domination and live in constant fear of being harassed by people on the street. As she puts it, ‘a stern Ayatollah, a self-proclaimed philosopher-king, had come to rule our land,’ and under his rule ‘[women] were never free of the regime’s definition of them as Muslim women.’ Although this is constantly a theme of discussion during the book club, in one particular situation, Nafisi portrays this condition of the Iranian women in public by drawing on one of the girls’ typical walks from her book club back home. She appeals to the readers to imagine one of her student as she leaves the privacy of the book club and heads home: “Let’s imagine one of the girls, say Sanaz, leaving my house…She puts on her black robe and scarf over her orange shirt and jeans, coiling her scarf around her neck…We follow Sanaz down the stairs, out the door and into the street. You might notice that her gait and her gestures have changed. It is in her best interest not to be seen, not to be hard to noticed. She doesn’t walk upright, but bends her head towards the ground and doesn’t look at passersby. She walks quickly and with a sense of determination. The streets of Tehran and other Iranian cities are patrolled by militia, who ride in white Toyota patrols, four gun-carrying men and women….They patrol the streets to make sure that women like Sanaz wear their veils properly, do not wear make up, do not walk in public with men who are not their fathers, brothers or husbands….If she gets on a bus, the seating is segregated. She must enter through the rear door and sit in the back seats, allocated to women. Yet in taxis, which accept as many as five passengers, men and women are squeezed together, like sardines….where so many of my students complain of being harassed by bearded and God-fearing men….”

This sort of description of the Iranian society as an insecure world filled with ‘goblins and witches,’ who are out to get the women, is repeated throughout the book and informs much of our understanding of the position of the Iranian woman in the public domain.

The above points, although painting us a supposed portrait of the condition of the Iranian women, do not give us much detailed description about the Iranian man. However, read contrapuntally, they are indeed directly feeding into the construction and maintenance of a certain image of the Iranian man that is hypervisible as a negative type in the West. Here, the position of the Iranian woman could be described in the context of what Foucault has called the “already-said,” or rather the repressed “never-said” of the obvious. By positioning the Iranian woman as the embodiment of oppressed womanhood, Nafisi is representing herself as the representative of the western woman, an epitome of modernity and progress that confirms the Iranian/Middle Eastern women’s oppression. Nafisi feeds on this position of privilege constantly, to demonstrate the Iranian women’s oppression. For example, after a lengthy conversation with one of the girls, Yassi, who has just revealed to Nafisi how her family had limited her every move, Nafisi writes, ‘Could she ever live the life of someone like me, live on her own, take long walks holding hands with someone she loved, even have a little dog? She did not know.’ These representations of the oppressed Iranian women, and the first hand affirmations of our narrators, signals towards the stereotypical character of the Iranian men as controlling, with absurd sexual deviance and fanatically religious beliefs. In most case we arrive at these character conclusions through the women’s descriptions, in the men’s invisibility, without having come across a single man who actually demonstrates these presumed characteristics first hand.

Although most of our information about the Iranian men in RLT comes through the women’s account, it would be untrue to say that men, as characters themselves are completely absent from the book. Men do appear as characters throughout the book. However, when they do pop up they are marginal cardboard types of characters of students, university officials or the revolutionary guards, of whom Nafisi does not have a high regard and to whom she does not give enough space to be developed as realistic characters. While Nafisi spends a considerable length in developing the characters of her female students, except in a few cases when she is describing her Western educated male friends who live in Tehran, when it comes to describing some of the male students she is reductive and her descriptions of them are as primitive people whose personality is reduced to their religious interests. For example, in describing one of the recurring male students, Mr. Bahri, in her class she writes, “Mr. Bahri, who was at first reluctant to talk in class, began after our meeting to make insightful remarks. He spoke slowly, as if forming his ideas in the process of expressing them, pausing between words and sentences. Sometimes he seemed to me like a child just beginning to walk, testing the ground and discovering unknown potentials within himself. He was also becoming increasingly immersed in politics. He become an active member of the student group supported by the government—the Muslim Students’ Association—and more and more often I would find him in the hallways immersed in arguments…..”

Additionally, on global scale, such representations of the Iranian man could be seen as feeding into the post 9/11 discourse of War on Terror where the abuse of women and the denial of their rights has been used as a mark of barbarism and an indication of a social sickness, that requires intervention. When Nafisi constantly emphasizes the lives of Iranian women as ‘doomed’ in various ways, claiming that ‘the [Western] novels were an escape from the reality in the sense that we could marvel at their beauty and perfection, and leave aside our stories about the deans and the morality squads on the streets,’ her words could be read as feeding into the discourse that appeals for the salvation of the brown woman from the brown man by the white man.

In short, RLT paints a very unrealistic and one-dimensional picture of the Iranian man that can be potentially damaging to the identities and images of some of our wonderful Iranian men.