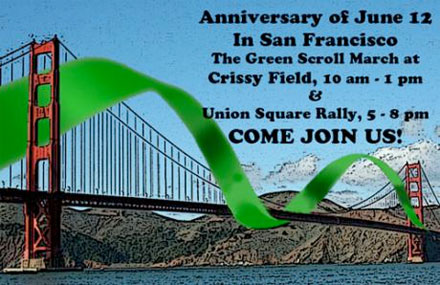 Almost 1 year ago,Iranians inspired millions all over the world when they took to the streets to dispute the June 12thpresidential election results and peacefully demanded justice, freedom and democracy for theircountry. Regrettably, the Islamic Republic responded brutally and clashesbetween police and protesters left dozensdead and thousands wounded, arrested, tortured, humiliated or disappeared. Today hundreds of protesters andpolitical prisoners are still sitting in Iranian jails for demanding their government be accountable tothem. Iranian dissent and protestscontinue. The Iranian government has been doing everything it can to block protests marking the anniversary of theJune 12th elections. Your participation in these events will be a veryimportant act of solidarity.

PLEASE COMESPEND PART OR ALL OF YOUR DAY WITH US ON JUNE 12.

We will walk theGreen Scroll toward the Golden Gate Bridge. This 2000-meter long piece of fabric covered in the signaturesof Iranians in diaspora is the world’s longest petition. We will begin our gathering at 10am in SanFrancisco’s Crissy Field (1199 EastBeach, Crissy Field Center); the march will start promptly at 11am. Then at 5 pm,join us at Union Square for our rally.