WAITING AT DE GAULLE: The Story of Mehran Nasseri Karimi aka Sir Alfred 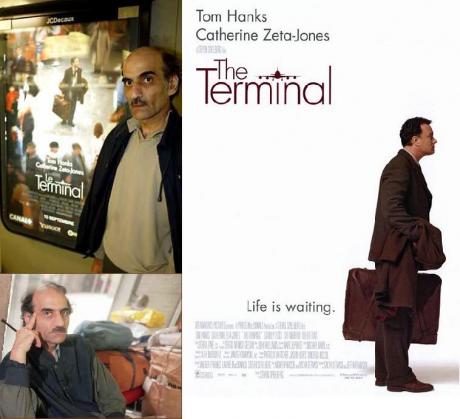 Mehran Nasseri Karimi landed at Charles de Gaulle airport in Paris in August 1988. A look into the surreal life of an Iranian (It inspored Spielberg’s “Terminal”) living in an airport lounge, unable to leave the airport without necessary papers.

Trailer for Waiting at De Gaulle:

The Terminal is a 2004 comedy-drama film produced and written by Andrew Niccol and Sacha Gervasi. The film is co-produced and directed by Steven Spielberg and stars Tom Hanks and Catherine Zeta-Jones. It is about a man trapped in a terminal at JFK International Airport when he is denied entry into the United States and at the same time cannot return to his native country due to a revolution. The film is said to be inspired by the 18-year-stay of Mehran Karimi Nasseri in the Charles de Gaulle International Airport, Terminal I, Paris, France from 1988 to 2006.

Trailer of The Terminal directed by Steven Spielberg and Starring Tom Hanks and Catherine Zeta Jones: