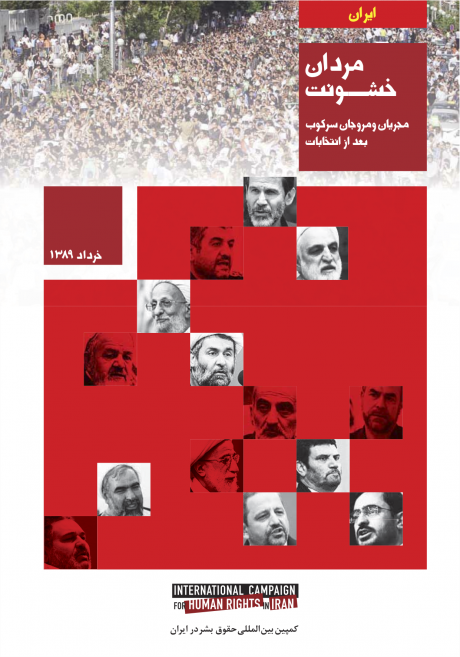 Throughout this violent crackdown, several high- ranking officials, within the security, intelligence, and judicial organs, stand out as responsible for implementing these policies. The International Campaign for Human Rights in Irancalls for a comprehensive investigation and prosecution of all the perpetrators of this violent crackdown, who either through their own direct actions or those of their subordinates are responsible for these atrocities. There are also numerous officials who have promoted, encouraged, and instigated violence. The Campaignis presenting some of the main perpetrators and promoters of violence here. Iran’s leader, Ayatollah Sayed Ali Khamanei, as the commander in chief of the armed forces as well as the ultimate authority in charge of the security and intelligence apparatus as well as the judicial branch, is obligated to order the investigation and prosecution of those responsible.

The fifteen individuals named in the recently released report include:

1. Hossein Taeb, Commander of the Basij Forces during the time of June elections. Forces under his command participated in mass beatings, murder, detention and torture of peaceful protestors.

2. Gholam Hossein Mohseni Ejei, Minister of Intelligence at the time of election and the country’s current General Prosecutor. Intelligence agents under his command were responsible of detention, torture, and extraction of false confessions under duress from hundreds of activists, journalists, dissidents, and reformist politicians.

3. Ismail Ahmadi Moghadam, Head of the Iranian Police. Forces under Moghadam’s command led brutal attacks on peaceful protests, attacks on and destruction of private property, and a violent night time attack on the dormitories of Tehran University.

4. Saeed Mortazavi, Tehran’s prosecutor General at the time of June election. He issued a blanket order used for detention of hundreds of activists, journalists, and students. In some instances, the blanket arrest warrant bearing his signature was dated two days before the 12 June elections. He is also responsible for sending detained street protestors to the Kahrizak Detention Center where they were tortured and ill-treated, resulting in four deaths.

5. Sadeq Mahsouli, Minister of the Interior of the Islamic Republic of Iran at the time election. As Interior Minister, Mahsouli had authority over all police forces, interior ministry security agents, and plainclothes agents. His forces were responsible for attacks on the dormitories of Tehran University on 15 June 2009.

6. Abolghassem Salavati, presiding judge of Branch 15 of the Islamic Revolutionary Courts. During the post election show trials, Salavati is one of the only three judges in charge of post-election cases. He has sentenced more than a hundred political prisoners, human rights activists, and peaceful demonstrators to lengthy prison sentences as well as at least nine execution sentences, earning the moniker, “The Judge of Death.”

7. Seyed Hassan Firouzabadi, Chief of Staff of the Joint Armed Forces of the Islamic Republic of Iran, the highest military organization responsible for directing all military divisions and policies, including the Islamic Revolutionary Guards Corps (IRGC) and police. Forces under his command carried out brutal repression of peaceful protestors as well as mass detentions.

8. Mohammad Ali Jafari, Commander of the IRGC. Forces under his command were directly responsible for a significant part of post-elections violence and arrests of reformist political figures, activists, and journalists.

9. Mohammad Moghisseh, Head of Branch 28 of the Islamic Revolutionary Courts. He has been in charge of the cases of many activists and protesters arrested after the June 2009 election.  He has not only issued long prison sentences based on unfounded charges, he has also issued at least three death sentences for the protesters.

10. Ayatollah Ahmad Jannati, Secretary General of the Guardian Council. Since the 12 June presidential election, Jannati has unabashedly incited violence, demanded death sentences for election protestors, and coordinated his rhetoric with the IRGC and security forces. He has repeatedly called protestors “corruptors on earth,” a charge that carries the death penalty. Jannati has continuously demanded execution sentences from the Iranian Judiciary, and supported the implementation of such sentences.

11. Ayatollah Mohammad Taghi Mesbah Yazdi, is the head of the Khomeini Education and Research Institute in Qom and a member of the Assembly of Experts. Over the past decade, he has become known as “the theoretician of violence,” for his unabashed promotion and defense of state-sponsored violence against dissidents. Through his inflammatory statements, he has been a leading figure in instigating violence against peaceful protestors objecting to election results and human rights violations.

12. Yadollah Javani, Head of the IRGC Political Office. He has repeatedly supported the use of violence and harsh interrogation tactics against post-election protesters. Javani’s statements have become the basis for indictments against protestors and have resulted in the IRGC’s takeover of interrogations.

13. Rouhollah Hosseinian, Member of Parliament. He has continuously incited violence and demanded death sentences against protestors. He led a group of 36 parliamentarians in introducing an urgent bill in Parliament that would reduce the appeals period for persons charged with moharebeh (enmity against God) and sentenced to execution to only five days. The bill was justified as a means to expedite the implementation of death sentences issued for post-election protestors.

14. Ali Saeedi, Representative of the Supreme Leader in the IRGC. Saeedi vehemently defended the role of IRGC forces in post-election crackdowns and their use of violence on citizens, becoming one of the highest ranking Islamic Republic authorities to sanction the actions of security apparatuses.

15. Hossein Shariatmadari, Managing editor of Kayhan Newspaper,  is one of the individuals who first accused reformist presidential candidates of a velvet revolution during the vote count after the June presidential elections and promoted violence against protestors.  Shariatmadari’s definition of a “velvet revolution” soon became the dominant literature used by the IRGC, Ministry of Intelligence, Basij, and police forces for cracking down on the post-elections protesters.