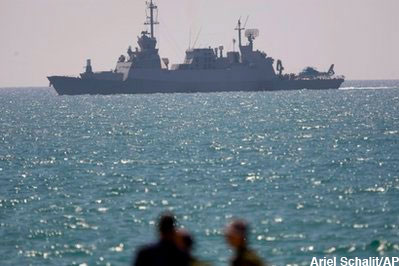 The bloodshed resulting from a clash between Israeli Defense Forces and pro-Palestine activists in international waters is nothing short of a diplomatic miracle for Iran.

Iran, the sole beneficiary of the fiasco, has much to gain and little to lose by using the incident as diplomatic leverage for gaining even closer ties to Turkey. And Turkey clearly is heading East, toward Iran and other states, and away from the West. Tensions between Turkey and Western states — not to mention Israel — have intensified.

Turkey’s position has been clear in numerous statements from government officials, including Turkish Prime Minister Erdogan, who expressed disappointment with the reactions from Israel and the United States. The Obama administration no doubt is treading cautiously in its response to Israeli violence. “Dry statements of condemnation are not enough […] There should be results.” Erdogan continued, saying Israel would not behave so rashly if it didn’t have the protection of a powerful nation — a thinly veiled reference to the United States.

Turkey’s harsh reaction is no surprise given that the majority of activists killed in the flotilla violence, which left nine people dead, were Turks. But Turkey is using the disaster to cement its political alliance with Iran. And Iran is endorsing Turkey’s position while also playing up the flotilla disaster to re-enforce its long-standing anti-Israel position at home and abroad.

Iran’s enthusiasm over the great benefits it is reaping from the catastrophe is apparent in the Iranian media, especially pro-government sources, according to insideIRAN.org. Fars news, a semi official news agency with intimate ties to the Islamic Revolutionary Guards Corps, dedicated fourteen of its sixteen homepage stories to the flotilla incident. Kayhan, a hardliner newspaper with ties to the Supreme Leader, dedicated its front page and its editorial to the convoy incident.

Playing up the flotilla incident has also allowed Iran to ignore a damaging report the International Atomic Energy Agency issued on Monday regarding Iran’s nuclear activities. The IAEA report, which was issued on Monday, stated that Iran has been preparing extra equipment for enriching uranium to higher levels – which could lead to Iran becoming a nuclear-armed state. The report also stated that Iran has not been transparent with the IAEA regarding its nuclear program.

IRNA, the Islamic Republic’s News Agency, ignored the IAEA report and instead published an interview with a lesser-known Iranian diplomat claiming the recent report “indicates IAEA’s full supervision of Iran’s enrichment activities.” This Iranian diplomat also said that the IAEA has found Iran to be in full cooperation with the UN nuclear watchdog.

Iran also benefits because the flotilla incident has deepened the rift between the United States and Turkey, which have had a shaky relationship since the start of the 2003 U.S. invasion of Iraq. But both countries since then have tried to mend the relationship. Now, however, Turkey’s NATO membership puts the United States in a very difficult position.

Under Article V of the NATO charter, any NATO member that is attacked in Europe or North America may call on all other NATO members to declare war on the attacking nation. At present, Turkey is threatening to provide naval escorts to any ships attempting to break through the Gaza blockade, an act that would likely lead to military confrontation between Turkey and Israel and potentially escalate the crisis into outright war. This would leave the United States in the unenviable position of either deciding to declare war on its longtime ally Israel, or essentially invalidating the practical purpose of NATO by refusing to heed the call of one of its members.

An Israeli-American fallout would also serve Iran, as it would be an opportunity for Iran to tout its long anti-Israeli stance and actions, as well as provide momentum for greater pressure on Israel to sign the Nuclear Non-Proliferation Treaty and distract world attention away from Iran’s nuclear program. Pressuring Iran while shoring up Israel, the Middle East’s sole nuclear-armed state, would prove extremely unpopular in the region. Todays Zaman, a Turkish daily with close ties to Turkey’s ruling AKP, fully agrees with this assessment: “Obama must make one thing clear: if the US is to confront Iran with sanctions or a military threat, both which will require international cooperation, there must be significant progress, if not a full agreement, on the Arab-Israeli track.”

Iran’s political capital in the region for taking the hardest stance against Israel is soaring. And whether the United States reprimands Israel, or ignores Turkey’s rage over the flotilla bloodshed, Iran will be celebrating.