An Afternoon of Poetry and Prose 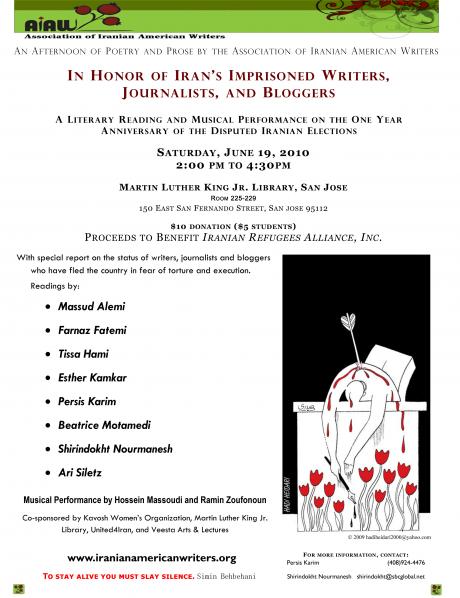 (San Jose, CA) – The Association of Iranian American Writers (AIAW) will host a reading to honor Iranian writers and commemorate the one-year anniversary of Iran’s 2009 disputed elections. The reading and musical performance celebrates the courage and resilience that Iranian writers, journalists, and bloggers have shown during the last year and will raise funds for the Iranian Refugee Alliance, Inc.

The reading by local authors and musical performance will take place at Martin Luther King Jr. Library in downtown San Jose from 2 p.m. to 4:30 p.m. The program will feature a message by the founding member of the Iranian Refugees Alliance, Deljou Abadi. Poets Farnaz Fatemi, Esther Kamakar, Persis Karim, as well fiction writers Beatrice Motamedi, Shirindokht Nourmanesh, and Ari Siletz and stand-up comedian and non-fiction writer Tissa Hami will read. Massud Alemi, a novelist and member of AIAW will speak on the status of Iranian writers in the aftermath of the 2009 uprising. Books by AIAW members will be available for purchase. The event is co-sponsored by United4Iran.org, Kavosh Women’s Organization, Martin Luther King, Jr. Library, and Veesta Arts & Lectures. All proceeds to benefit Iranian Refugees Alliance, Inc.

Iranian writers have been at the forefront of the struggle for freedom of thought and speech and they have paid a price for their outspokenness, along with students’ and women’s organizations. Iranian writers, journalist, and bloggers have been facing insults, threats, arrests, imprisonment, and even torture. Writers have been one of the primary targets of the Islamic Republic’s crackdown; many writers and journalists have, since June 2009, fled the country.

The Association of Iranian American Writers is dedicated to supporting and promoting the work of fiction and non-fiction writers, essayists, poets, journalists, photojournalists, and other word-based artists. More information on AIAW is available on line at: http://www.iranianamericanwriters.org