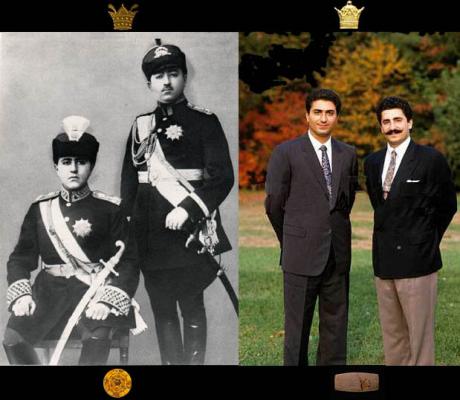 Ahmad Shah acceded to the Peacock Throne on July 16, 1909, following the overthrow of his father and predecessor, Mohammad Ali Shah, who had attempted to reverse earlier constitutional restrictions on royal power, and thus enraged the majority of Iranians. It is alleged that Ahmad Shah was one of the most democratic-minded kings of Persia while others dismiss him as a weak ruler, uninterested in attending to the matters of government.

Prior to his death, it is said that Ahmad Shah followed frequent crash diets which didn’t help his health. For example he lost and gained two hundred pounds within a two year span. He died in 1930 at Neuilly-sur-Seine, outside Paris, France. His brother, former crown prince Mohammad Hassan Mirza, assured the physical continuation of the dynasty through his descendants.

Ahmad Shah attempted to fix the damage done by his father by appointing the best ministers he could find. He was, however, an ineffective ruler who was faced with internal unrest and foreign intrusions, particularly by the British and Russian Empires. Russian and British troops fought against the Ottoman forces in Iran during World War I. The War led to outcries across the country because people of Iran were not happy that they were being used as a battleground. Thus, leading to local movement across the country that tried to challenge the power of Ahmad Shah Qajar and his government.

About Ahmad Shah Qajar married five times. His first wife was Lida Jahanbani. From this marriage there was no offspring. He had 4 Children from his 4 other wives:

About Mohammad Hassan Mirza (20 November 1899–7 January 1943), brother of Ahmed Shah Qajar of Iran, and former Crown Prince of the Qajar dynasty. Soon after Reza Shah deposed the Qajar dynasty and made himself Shah of Iran in 1925, Prince Mohammad Hassan and his family were sent into permanent exile to England. In 1930, he declared himself the rightful heir to the crown as pretender to the throne. He died on 7 January 1943 in Maidenhead, England and was buried in Kerbala, Iraq.

His son, Hamid Mirza Qajar continued to be as pretender to the throne and was favoured by the British as a potential successor to Reza Shah Pahlavi after the latter was deposed during World War II. His efforts were hindered by the fact that he didn’t speak Persian and his mother tongue was English.

About Crown Prince Reza Pahlavi born in Tehran, Iran on October 31, 1960 to the Shah of Iran and Empress Farah Pahlavi. Reza Pahlavi’s siblings include his sister HIH Princess Farahnaz Pahlavi (March 12, 1963), brother HIH Prince Ali-Reza Pahlavi (April 28, 1966), and sister HIH Princess Leila Pahlavi (March 27, 1970 – June 10, 2001), as well as a half-sister, HIH Princess Shahnaz Pahlavi (October 27, 1940). He left Iran at the age of 17 for air force training. With the monarchy overthrown and an Islamic Republic established, Reza Pahlavi did not return to Iran. He received a bachelor’s degree in political science from the University of Southern California. A jet fighter pilot, Reza Pahlavi completed the United States Air Force Training Program at the former Reese Air Force Base in Lubbock, Texas. During the Iran-Iraq War, Reza Pahlavi volunteered to serve in Iran’s military as a fighter pilot, but was declined by the clerical regime.

Reza married Yasmine Etemad Amini on June 12, 1986. Yasmine, a graduate of the George Washington University School of Law, worked for ten years as a lawyer for the Children’s Law Center as a legal advocate for at-risk youth. Yasmine also founded the Foundation for the Children of Iran in 1991, a non-profit foundation that provides health care services to Iranian children or children of Iranian origin.

About Prince Ali Reza Second in Line to the Peacock Throne after his brother Crown Prince Reza. Born on 28 April 1966)  is the younger son of Shah Mohammad Reza Pahlavi and his third wife, Empress Farah. He lives in the U.S. where he received a Bachelor’s degree from Princeton University, a Masters of Arts degree from Columbia University, and currently studies at Harvard University as a PhD student in ancient Iranian studies and philology