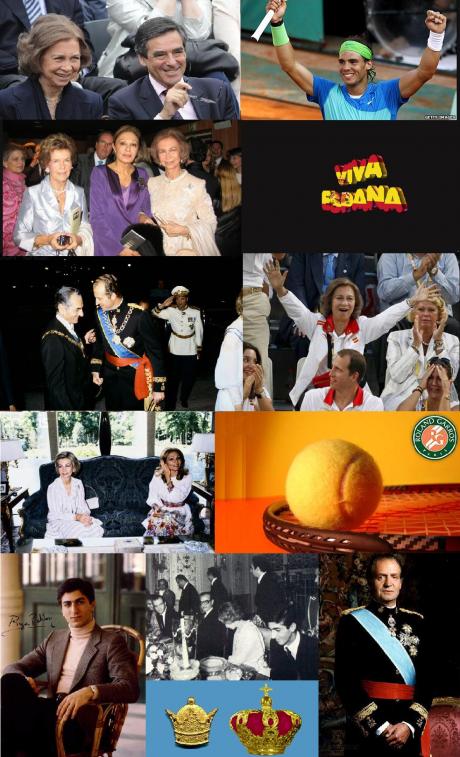 Rafael Nadal won his fifth French Open title Sunday, beating Robin Soderling 6-4, 6-2, 6-4. Nadal improved to 38-1 at Roland Garros, with the only loss to Soderling in the fourth round a year ago. (June 6)

Notice Nadal’s GREEN Head Band ;0) … a Happy Coincidence or a Sign of the Gods ? …

Born in exile during the era of the republic, Juan Carlos was the son of Infante Juan Duke of Barcelona he was chosen by Generalissimo Francisco Franco to be his successor in 1969. In his last days in 1975 Franco gave Juan Carlos full power and upon his death the Cortes proclaimed him King of Spain. He oversaw the transition of the country to a democracy and was instrumental in stopping an attempted coup by members of the military. In 1982 a socialist government was voted in which largely ended the King’s active participation in government. Throughout his reign King Juan Carlos has worked to keep Spain united and strengthen ties with the nations of the former Spanish Empire. He is known for his informal and friendly style, his love of sailing and for famously telling the Venezuelan dictator Hugo Chavez to “shut up!”

El Cid – For King Alfonso and For Spain drives the Arab Moores Out of his Homeland:

Kings of Spain, from the Catholic Monarchs to Juan Carlos I:

Spanish TV Scoop shows Princess Laetizia of Spain and Constitutionally next Queen of Spain) sees her skirt blown by the wind revealing her underwear:

Queen Sophia is sister to former King Constantin of Greece, She is Greek but considers herself Spanish:

Royalty: Farah and Sophia at Niavaran (1976)

AN AXIS OF LOVE: A Persian Tribute to Poland’s Dignified Grief

OBAMA’s ROYAL VISIT: King Juan Carlos of Spain Visits Washington (Note For JJ: This Is Not a News but Blog)