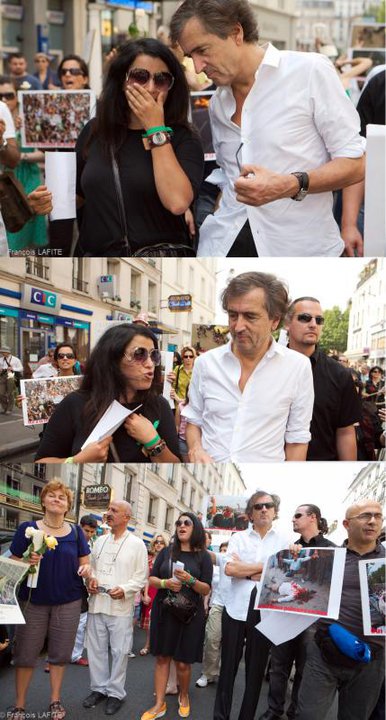 Bernard-Henri Levy scrutinizes the totalitarianisms of the past as well as those on the horizon, and argues powerfully for a new political and moral vision for our times. Authors@Google Conference (Mountain View, CA). (Photo Bernard-Henri Levy demonstrates with Iranian artist Marjane Satrapi in  Free Iran Demo, Paris June 2009)

French philosopher Bernard-Henri Lévy defends his term “fascislamism,” claiming modern-day islamic fundamentalist movements to have roots in European fascism of the 1930s. Lévy argues that condemning fascism on one hand while tolerating muslim fundamentalism on the other is a form of racism in reverse.

Slavoj Žižek’s work triggers continuous controversy; Welcome to the Desert of the Real, his analysis of 9/11, was attacked both as anti-Semitic in Israel and as Zionist in Egypt. He is the author of more than thirty books and is the subject of the documentary Žižek. His own critically acclaimed documentary, The Pervert’s Guide to Cinema, was the subject of a film retrospective in 2007 at the Museum of Modern Art. Žižek is a senior researcher at the Institute of Sociology, University of Ljubljana, Slovenia, and has been a visiting professor at Columbia University, Princeton, and The New School.

Palin and Obama, A Clash of Civilizations – Bernard-Henri Lévy:

In this unprecedented critique, Bernard-Henri Lévy, one of the worlds leading intellectuals revisits his political roots, scrutinizes the totalitarianisms of the past as well as those on the horizon, and argues powerfully for a new political and moral vision for our times. Are human rights Western or universal? Does anti-Semitism have a future, and, if so, what will it look like? And how is it that progressives themselves-those who in the past defended individual rights and fought fascism-have now become the breeding ground for new kinds of dangerous attitudes. Illuminating these and other questions, Lévy also brings to life his own autobiography.

Bernard-Henri Lévy is a philosopher, journalist, activist, and filmmaker. He was hailed by Vanity Fair magazine as Superman and prophet: we have no equivalent in the United States. Among his dozens of books are American Vertigo, Barbarism with a Human Face, and Who Killed Daniel Pearl? His writing has appeared in a wide range of publications throughout Europe and the United States. His films include the documentaries Bosna! and A Day in the Death of Sarajevo. Lévy is co-founder of the antiracist group SOS Racism and has served on diplomatic missions for the French government.

RESPONDING TO REZA’s CALL: An Iranian Solidarnosc in the Making … by Darius KADIVAR