Definition of Oxymoron: The Green Movement 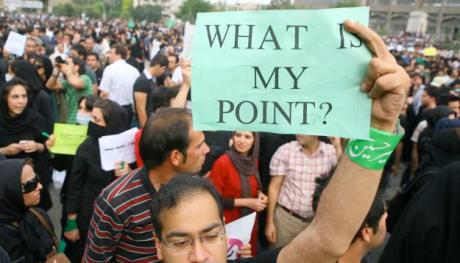 Coming up on this 1st anniversary of the almost forgotten stolen election, the green movement is all but a fond flicker. Despite repeated attempts to re-boot a crashed program that people thought that the Green movement was, nothing but nothing and no sign of life or a plan exists in the grassy realm of whoever is in charge of it. Whatever “it” is, or more aptly, was.

Modern day Philosophers, Academics, Theoreticians, and even mathematicians, have vainly tried every angle and argument, complete with (400 viewing Youtube videos of yet another angle of the Neda video set to music) to purport, report, and prove their tissue-thin evidence of some faint synaptic activity, to no avail.

It may very well be, that all of this, the sea of green shirts, the plodding aimless marches to Azadi square, the consequential beatings, and the resulting retreat, were nothing more than a mere riot. Sore (yet stylishly dressed) losers from the North of Tehran, merely venting at the (boorishly Bazari) winners from the South. It cannot be proven that if you added up all the votes fairly, that Ahmadinejad did not win the election.

The Truth is, as a qualifier to be Iran’s President, Mousavi (who was preselectedby Khamenei as suitable) is no better qualified than Ahamadinejad, the “hare” apparent. Mousavi is merely a former disgruntled unfairly sacked Prime Minister, obsessed with getting his job back, and then getting even with those who took his job away from him. Mousavi, the man who holds the record for most autographed executions in the history of Iran. Ahmadinejad claims to have pulled the trigger himself on more than one occasion. Mousavi approved ALL of them. This is the savior of a democratic future of Iran? Mousavi?

True movements are actually organized, have a goal, and an objective. This one wasn’t. You want change? You march to Kahmenei’s home, not Azadi square! Movements have manifestos and demands that are clear adn known to the marchers. You know, strategy and tactics. This is not the national Iranian football team, this is our freedom we’re talking about! This movement apparently wished only to seek out the location of some rumored to be missing votes. Really! You mean to tell me that somehow Iranians in Iran thought that if they accepted Khamenei’s choice for them, and chose between an executioner and the guy handing down the death sentences, that their votes were going to be counted fairly and accurately? Really! Just because the people in charge use God to justify their existence?

The truth could be that Iran’s Green movement may have not actually been one, but merely an outpouring of curiously disappointed ignorant people, naive enough to believe their handlers offering them sweets through the bars of the cage. No human or civil rights expression, just mere chaos theory and nothing better to do when 75% of your fellow friends and demographic group happen to be unemployed.

The truth is that if you live in Iran you should never ever, ever, EVER vote, specifically to record your objection to an oppressively flawed system through abstinence and rightly and smartly refusing to participate in it whatsoever. Voting in Iran is complicity in the game. If you don’t like or agree with the game, you don’t play! Pure and simple. Expecting to change Iran by voting is a delusion on an epic Saadi-style Maykhaneh level.

Today, now, the very first step we must take is to get off the proverbial fence on our Iranian reality. Everyone who is even 1/8th of an Iranian, must choose this simple choice and be defined by it;

Are you FOR the Iranian Government?

Or are you AGAINST the Iranian Government?

Anyone who brings up a conciliatory argument, is merely rightly sad, and an unfortunate deluded collusionist who is too afraid to bet the hand they have been dealt. Choosing to hold and avoid. Hoping no one will notice.

But we and the world know, that the hand we have been dealt is a 13. So, do we Stay or do we Hit?