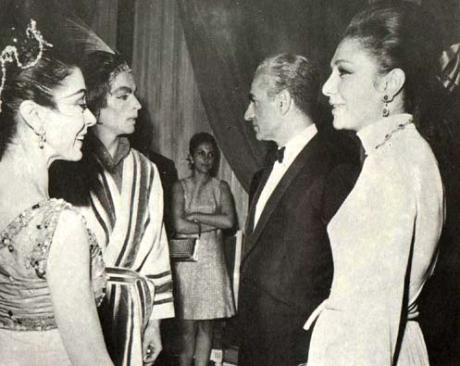 Rudolf Khametovich Nureyev (Tatar: Rudolf Xämät ulı Nuriev, Russian: Рудольф Хаметович Нуреев) (17 March 1938 – 6 January 1993) was a Tartar dancer from the Soviet Union, primarily known for his work in ballet. Nureyev’s artistic skills explored expressive areas of the dance, providing a new role to the male ballet dancer who once served only as support to the women.

He defected to the West, despite KGB efforts to stop him.According to KGB archives studied by Peter Watson, Nikita Khrushchev personally signed an order to kill Nureyev. More Here

Dame Margot Fonteyn de Arias, DBE (18 May 1919 – 21 February 1991), was an English ballerina of the 20th Century and is widely regarded as one of the greatest classical ballet dancers of all time. She spent her entire career as a dancer with the Royal Ballet, eventually being appointed Prima Ballerina Assoluta of the company by HM Queen Elizabeth II. More Here

About Rudolph Nureyev and Margot Fonteyn:

Russian Rudolph Nureyev and British Margot Fonteyn became longstanding dance partners and continued to dance together for many years after Nureyev’s departure from the Royal Ballet. Their last performance together was in Baroque Pas de Trois on 16 September 1988 when Fonteyn was 69, Nureyev was aged 50, with Carla Fracci also starring, aged 52. Nureyev once said of Fonteyn that they danced with “one body, one soul”.

Together Nureyev and Fonteyn premiered Sir Frederick Ashton’s ballet Marguerite and Armand, a ballet danced to Liszt’s B minor piano sonata, which became their signature piece. They always completely sold out the house. Kenneth Macmillan was forced to allow them to premiere his Romeo and Juliet, which was intended for two other dancers, Lynn Seymour and Christopher Gable. Films exist of their partnership in Les Sylphides, Swan Lake, Romeo and Juliet, and other rôles.

A Dialogue In Art: Nima Kiann’s Ballets Persans in Sweden By Darius KADIVAR