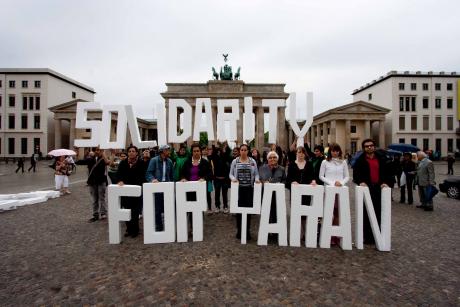 On a joint action day, the United4Iran network and the Baha’i community of Berlin are sending out messages of solidarity for the seven imprisoned Yaran Baha’i leaders.

With supersized letters (ca 1 meter high) made of styrofoam, messages of compassion to all Iranians and especially to the imprisoned Baha’is were formulated in front of the Brandenburg Gate, a structure symbolizing freedom, hope and unity, in Berlin.

The 12th of June, besides its signficance as the anniversary of the presdiential election, is also the date of the fourth court appearance of the seven Baha’i leaders, which have been under arrest for more than two years. The trial began on January 12th, after the seven Baha’is had been captivated without charge for 20 months.

At the action day in Berlin one of the organizers commented:

„Think about what happened in Germany seventy years ago. Noone was watching closely. Now the same is happening in Iran. But this time we have the opportunity to raise our voices.“

See more pictures of the messages of solidarity event at www.flickr.com/photos/bahaide