KNIGHTHOOD: Amin Maalouf bestowed with the 2010 “Prince of Asturias Award” for Literature 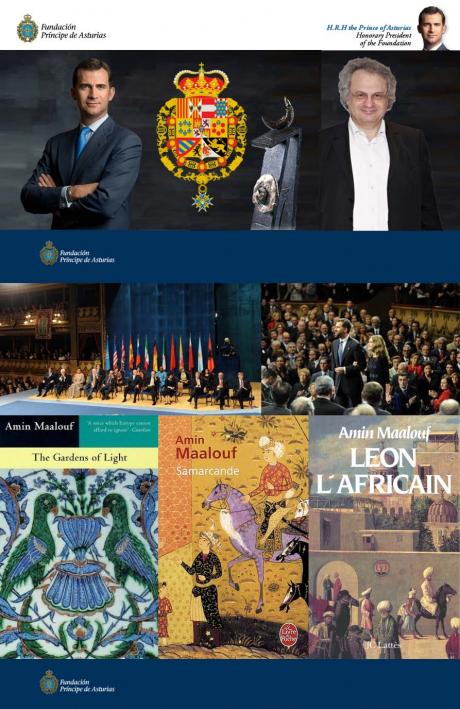 MADRID, June 9, Lebanese writer Amin Maalouf author of such classics as “Leo Africanus,” “Samarkand” and “The Gardens of Light” was awarded Spain’s Prince of Asturias Award for literature Wednesday ahead of 27 other candidates.

The Prince of Asturias Foundation announced the prize in Spain’s northern city of Oviedo. It said that Maalouf’s explorations of the Mediterranean world from a standpoint of coexistence and tolerance had “made a statement for understanding and the building of bridges between cultures from an intellectual perspective.”

Maalouf was born in Beirut in 1949 and his works include “The Crusades Through Arab Eyes,” “Leo Africanus,” “Samarkand” and “The Gardens of Light.”

The Prince of Asturias Award, which is worth 50,000 euros (60,000 U.S. dollars), is awarded annually in Spain in eight categories, including the arts, sports and science.

Amin Maalouf Interview on why he writes in French:

The Jury’s decision was explained in the following terms:

“2010 Prince of Asturias Award for Letters was confered to the Franco-Lebanese writer Amin Maalouf, who, through historical fiction and theoretical reflection, has managed to lucidly address the complexity of the human condition.

Using intense, suggestive language, Maalouf places us in the grand Mediterranean mosaic of languages, cultures and religions to construct a symbolic space for meeting and understanding.

Contrary to desperation, resignation or victimism, his work traces a path of its own towards tolerance and reconciliation, a bridge that extends deeply into the shared roots of peoples and cultures.

Statement by Amin Maalouf, on being bestowed with the 2010 Prince of Asturias Award for Letters:

“It is both a great honour and a great joy for me to receive the Prince of Asturias Award. Ever since the beginnings of my literary activity, Spain has always been present in my work. Not only because it is the motherland of the hero of my first novel, Leo Africanus, but also, and above all, because it has been an emblematic meeting place –and has remained so for centuries– between the three great Mediterranean religions. And in our time, Spain has also been the laboratory of an exemplary renewal of democracy.

For these reasons, and for a number of others, I am happy and proud to find myself –thanks to this prestigious award that has just been bestowed on me– even closer to this great country and its culture, which has been such an inspiration for me in my books. Once again, thank you!”.

Amin Maalouf was born in Beirut in 1949 of a Christian family. He studied political economics and sociology at the French University in Beirut and worked for the daily newspaper An-Nahar. In 1976, due to the Lebanese civil war, he moved to France in exile. In France, he continued his journalistic career as the editor of Jeune Afrique, covering numerous events such as the Vietnam War and the Iranian revolution. Since 1985, Maalouf has dedicated himself completely to writing, producing historical reality and fiction, novels and essays.

In 1983 he published his first work, The Crusades Through Arab Eyes, which examines this period in history from an Arab perspective. In his first novel, Leo Africanus (1986), he portrayed, in the form of a memoir recorded by a traveler, the Mediterranean world at the beginning of the 16th century. Among his fiction novels are Samarkand (which earned the 1988 Maison de la Presse Prize) and The Gardens of Light (1990). Later he published The First Century after Beatrice (1992), an allegory of the north-south divide, while at the same time a plea for women. In 1996 he published Ports of Call, a metaphor of the Middle East crisis as well as his own personal turmoil. In his second essay, In the Name of Identity: Violence and the Need to Belong (1999), Maalouf analyzes the notion of identity and the violent passion that it provokes. The author wonders about the difficulty of assuming the many forms of freedom and why affirming oneself must involve negating others. This work earned Maalouf the Charles Veillon European Essay Award. Balthazar’s Odyssey (2000) is, conversely, an ode to tolerance and the meeting of different cultures. In 2004 Maalouf published Origins: A Memoir, and in his latest essay, The Mismatch of the World (2009), Maalouf asks whether the current period of turmoil could lead to the development of an adult vision of individual beliefs and differences and of the destiny of this world that we all share.

Maalouf also wrote the libretto for the opera L’amour de loin, of the Finnish composer Kaija Saariaho, which debuted at the 2000 Salzburg Festival. He has obtained, among other awards, the Prix Goncourt for The Rock of Tanios (1993), the Prix Mediterranée and the Gold Medal of Andalucía. He has received an honorary doctorate from Universitat Rovira i Virgili in Tarragona.

“GAY” KNIGHTS OF THE REPUBLIC:Jim Carrey and Ewan McGregor Get French Honor ;0)