The Big Picture and the Small 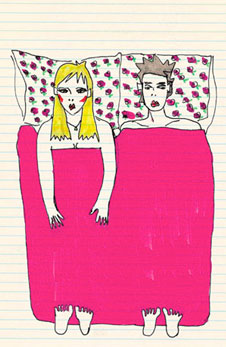 He called in the evening.

“I’ve got an idea,” he said. “How about we go out on Friday night and we’re really really nice to each other?”

“So nice that we can’t disagree?”

“No, not so nice as that. But we just have to be extra nice when we disagree.”

“Why do we disagree so much?”

“The question is funny. Because any two people are going to disagree. By virtue of being two different people.”

“We aren’t any two people.”

“Okay,” he said. ‘But sometimes it’s good to disagree a lot. It shows that we’re being honest.”

“I don’t want to get good at disagreeing with you. I want us to not disagree so much.”

“Well, you like dinner, don’t you? Let’s start with that.”

“Do you think about it?”

“What do you think about it?”

“Well, I think we’re both trying very hard to live. And we’ve found some ways to live and we’re very protective of those ways.”

“Right. But we can’t do any kind of living together if we can’t agree on some of those ways.”

“We believe in being nice.”

“That’s the biggest picture I’ve every heard of. That’s too big a picture. That’s bigger than the ceiling of the Sistine Chapel.”

“Are you saying that Michelangelo is a bad artist?”

“I’m saying that if being nice were enough, we wouldn’t be having so many disagreements.”

“Well, along the way we’ve both built up some stories about what the world is. And we’re trying to keep those stories for ourselves and listen to the other person’s story as well. That’s not an easy thing. I think we need to look at each other and say, ‘Your story of what the world is may not be mine, but it’s gotten you here, and I respect that.'”

“Can we talk about the cost of having gotten here?”

“In each other or in ourselves?”

“Maybe we could ask about the cost.”

“If we ask, we might find out that they are more aware of it than we thought.”

“What about being really really nice to each other?”

“We’re laying the groundwork for it.”

“Sometimes. We’ve laid a lot of groundwork for it though.”

“You really don’t mind thinking of it as work, do you?”

“Everything is work,” he said.

“It’s all right if I am. You are work sometimes too. I’d just like to know.”

“You are the best kind of work. Because all work has its rewards, but the rewards with you are immediate. And they make me wonder if I deserve them.”

“Do you know how lucky you are to have a woman who can hear the romance in that?”

“Look at us agreeing.”

“Well, we’re going to have to find more that we agree on that your being lucky to have me.”

“We will. But we shouldn’t fear disagreeing either. I don’t expect anybody to agree with me a lot of the time.”

“Yes. But I’d rather be lonely than surprised.”

“Do you mean disappointed?”

“Are you disappointed when we disagree?”

“No. I’m not. Because I know it’s coming from a place of consideration. I trust where it ‘s coming from.”

“Don’t you every wish I thought more like you?”

“Sometimes when you stop wishing for it is when you find it.”

“In the big picture?”

“In the big picture and in the small picture.”

They were quiet for a while.

“Do you think there will ever be a time when you won’t see me as work?” she said.

“It’s all right. I know that you think of life as work and that includes everybody in it. I just wonder if there will ever be a time when you’re struggling with some part of life and instead of working harder at it, you say, well, at least I have her.”

“What if I don’t say it instead of that but in addition to it?”

“That’s really the best I should hope for, isn’t it?”

“I don’t know what it is. It’s unlike anything I’ve ever come across. I know that much.”

“What I want is to make it a compliment in the long run. I hope I can. Because you’ve given me some space to do that, and I am very appreciative of that. You’ve given me a lot, more than you know, and I just want to live up to that, that’s all”

“That is nice. So that’s the kind of talking you would like to do?”

“How long do you think we can go on like that?”

“What about the long run?”

“It’s the best thing for the long run.”

“To go out on Friday night and be really nice to each other?”

“It’s better than going out and disagreeing about everything.”

“It’s a lot better than that.”

“Never mind what you don’t know. How do you feel about it?”

“Yes. I trust your end of it and I trust my end of it. That’s why I think we can put it aside.”

“I think we can put it aside too.”

“All right,” he said. “What time would you like to meet and have dinner and put it aside?”