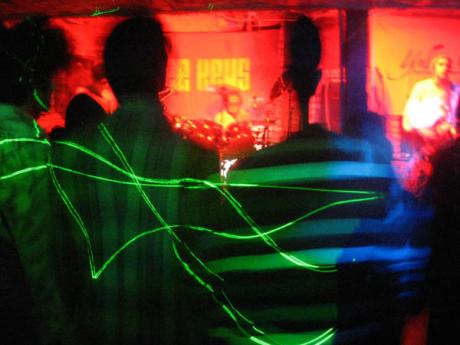 CNN iReport–The Free Keys emerged from Tehran’s music underground to international acclaim when they were featured in the Cannes award winning film, No One Knows About the Persian Cats. Not approved by the Ministry of Culture and Islamic Guidance, The Free Keys fled to Pune, India where they’ve now legally released the track, “Ships.”

The unusual time signature, enticing riff and mischievous vocals beckon like some kind of rock siren across the waves in moonlight. Reverberating echoes loop back on themselves, reaching critical mass. Suddenly one feels like the floor is collapsing–and one is falling down, down to the bottom of the sea.

Some enjoy the sensation of falling, skydiving, high diving. But “Ships” does not convey simple thrills. It’s something deeper, more primal, more real—akin to the sinking feeling that something is deeply wrong and terrible events may be about to transpire.

Such keyed-up emotion is not surprising given that the The Free Keys received international exposure just as the regime was about to crack down. But “Ships” could be topical within the larger context. The Islamic Republic debuted its first domestically built destroyer warship earlier this year. More Israeli nuclear submarines have reportedly headed for the Persian Gulf amidst international speculation over potential Iranian blockades of the Strait of Hormuz in retaliation for increased sanctions and threatened ship inspections. Hundreds of “bunker buster” deep penetration bombs were reportedly shipped to the U.S. base on Diego Garcia in the Indian Ocean south of Iran. And a few days ago Egypt allowed at least one Israeli and 11 American warships to pass through the Suez Canal reportedly headed towards Iran or U.S. ally, Pakistan. After all, just as the U.S. was passing “crushing sanctions”, Tehran signed a $7 billion agreement inaugurating the construction of a gas pipeline from Iran to Pakistan.

I asked The Free Keys’ lead guitarist, Arya, whether the song is about war ships. He replied, “Ha ha, no. Actually it was merely a coincidence that we noticed too. ‘Ships’ is the title of our friend Rajan Virdee’s poem that we used as lyrics. It’s about a brewing love–and how in the abstract love has a strictly narcissistic motive behind it. One line in the poem says:

‘But if such love is conjured under one spot-light

it’s just as easily lost in despising and spite

like two ships crashing and burning in the night.'”

Ships launched by proud nations with complex, intertwined histories may approach each other soon. Will there be an engagement making The Free Keys’ new track eerily prophetic? The music video for “Ships” is reminiscent of torpedoes and explosions.

Currently The Free Keys are offering listeners the opportunity to access this track for free. Arya continued, “The song is available for free download because it’s a prototype version. Obviously the album version won’t be. You can download it on www.4shared.com/audio/zfRkRRL2/Ships.html ”

And you can watch the music video at http://jigsawnovich.blogspot.com/2010/06/free-keys…

Julie Jigsawnovich is an artist, musician and writer living in New York. Contact her at Jigsawnovich1 (at) gmail (dot) com