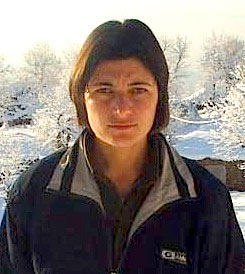 Please write to the following Iranian authorities regarding Zainab Jalalian’s case and asking for her sentence to be overturned and a new, impartial trial to be held, with access to legal counsel and protection from coerced confessions. A sample letter you can use, or modify, follows.

I am writing to you regarding the case of Zainab Jalalian, a political prisoner sentenced to death on 26 Nov 2009 on charges of Mohareb.

On June 26 2010, several online news organizations reported that Zainab Jalalian’s death sentence ruling has been sent to the enforcement department and she is in imminent danger of execution.

Zainab was denied access to legal counsel at her trial; her plea to say goodbye to her family was met with, “shut up” by the sentencing judge, and she was condemned to death by hanging. This is in direct violation of the International Covenant on Civil and Political Rights (ICCPR), to which Iran is a signatory, which guarantees defendants access to legal counsel and a “fair and public hearing by a competent, independent and impartial tribunal” (Articles 14 and 10). As Ms. Jalalian was not given a fair hearing with access to legal counsel, such an execution would be a deplorable action and illegal under international law.

Given the above, I respectfully request the following for Zainab Jalalian:

– if an imminent execution is planned, that it be immediately halted;
– for her death sentence to be overturned on the grounds that she was not granted a fair trial with legal representation;
– that she be granted a new trial if charges against her remain, with access to legal counsel, a public hearing by an impartial tribunal and protection from torture or coerced confessions as laid out in the ICCPR and UDHR (Universal Declaration of Human Rights).