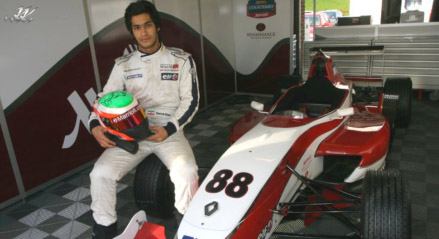 A 20 year old Iranian racer Kourosh Khani is hoping to become Irans first F1 driver having spent the last 4 seasons in the UK perfecting his skills and developing himself as a professional race car driver. At the age of 8 he was introduced to Kart racing by his father in which he became very competitive and often beating drivers older than him and with more experience.

Whilst his focus remained on becoming a future champion, Kourosh enjoyed racing Dune buggies  for fun and at the age of 10 set a world record by jumping 20 meters in his Dune Buggy and 2 years later extended the record to an impressive 30 meters.

“My father built a Dune Buggy for me which I started to race for fun. He would take me to the mountains and I would learn how to make small jumps. I realised that I enjoyed this very much and soon began making bigger and bigger jumps. I did a 20-meter jump and set a world record in the process 2 years later I set another record. This was a great achievement for me”

In 2006, Kourosh made the brave step to move to the UK, where he would face two challenges, to learn English and to race against the best young drivers in the world.

“Coming to England was a big step for me, if I wanted to reach Formula 1, I would have to make big sacrifices and I was ready to do whatever I had to do to reach the top. I took part in a week long intensive racing course at the Silverstone Racing Academy where I obtained my racing licence and achieving a win and a second place”

Success continued for the young charger from Iran, in 2007 Kourosh entered the prestigious British Formula Ford championship, which produced many successful Formula 1 world champions such as Nigel Mansell, Ayrton Senna, Damon Hill and many more. His first full season in cars netted him 3 class wins from 9 starts and went on to finish 6th overall in the Scholarship class.

For 2008, Kourosh in his quest to climb the ladder of motorsport, he signed up with Welch Motorsport to race in the Barc Formula Renault 2000 series racing a 200bhp Tatuus Formula Renault, the same car that the likes of Lewis Hamilton and Kimi Raikkonen pushed to numerous race wins and Championships.

“For me the formula Renault is a proper racing car, with full wings it produces aerodynamic down force in a similar manner to a Formula 1 car. It is the ideal training ground where a driver can develop his skills as racing driver in pursuit of reaching the highest level in motor racing. My first season went very well; I had some good results as well as a win at Croft and finishing 3rd in the winter Championship”

Koroush continued with Welch Motorsport for 2009 where he had a difficult season, lack of funds meant he was not able to test as much as he would have liked but put in some charging drives to finish the championship in 8th place overall. “2009 was a challenging year for me, the level of competition was very high, with some very good drivers. I was not able to test as much as I would have liked because we just did not have the budget compared to other drivers, but I gave it my best with the resources available at my disposal”

Now in his 3rd year of Barc Formula Renault, 2010 has the potential to be Kourosh’s best season yet. Starting the season in the new revised spec car, which is up to 2 seconds faster than the previous car, solid point’s finishes in the season opener at Brands Hatch and at Silverstone Kourosh is currently 3rd in the Championship. “I am very excited about 2010, I am driving better than ever and my confidence is sky high. I will do my all to make sure I catch up the leaders and try to win the championship this year”

Kourosh is currently preparing for his next race at Croft on the 3rd and 4th of July, he has been doing intense fitness training and Karting to keep his race craft sharp. “I have stepped up my training for the last 3 weeks working out 6 days a week and upto 5 hours a day, I want to be in the best mental and physical condition. I recently bought a Kart which I am driving regularly to keep my race craft and reflexes sharp!”