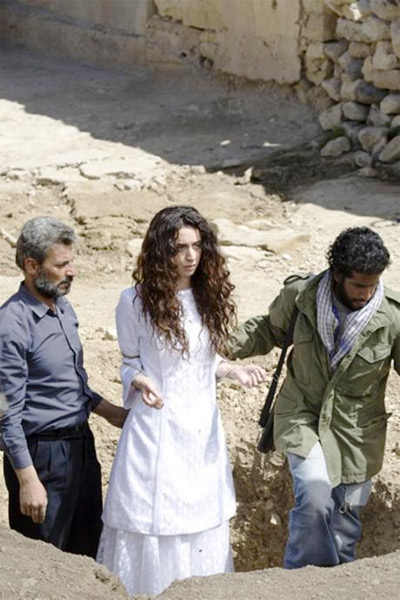 I watched The stoning of Soraya M., alone and on streaming video online because no one wanted to watch it with me, too queasy. It is certainly worth watching because it is about an unjust and barbaric law of the land which we’re trying to abolish and told by one of Iran’s best actors, Shohreh Aghdashloo, it certainly would’ve had a better chance of reaching larger audiences around the world.

Other than Aghdashloo another very good and talented Iranian actor/legend is Parviz Sayyad who also played very well in his role. In fact come to think of it only these 2 played and dressed right for their parts. The remaining casts were out of place and over dressed and nothing like you’d expect in a small village in a remote part of Iran.

I decided to watch this movie and now to write this review after reading an article earlier this year about the comments someone tied to this movie, not sure if it was the director or producer or someone else, critical that the movie didn’t get any attention at Oscars.

I think the subject matter is a worthy subject which could get enough recognition if enough attention to detail is used and a good screen play written. Given this was based on a true story the general script was already there and it was up to the director to have used his/her artistic license to create a movie which could be watched by larger audiences.

In my opinion to achieve this goal, reaching a large audience, one should not focus 2/3 of the movie on the stoning scene itself and expect the audience to have either nerves of steel or to think this is movies so don’t worry about it.

There is so much to be told about the law of stoning and how it became about in Iran. For example, early in the revolution many zealots jumped the gun to draw first blood and announce that the Islamic ‘justice’ has arrived and stoning someone was the proof. Or what are the ‘requirements’ for stoning and how it should be carried out.

In this movie these nuances were all over the place. The woman was stoned not because she slept with anyone but because she took a nap by herself in a strange man’s house while she worked there as a maid! Ok fine that goes to show how they killed her and what a huge injustice was done, but shouldn’t there be a discussion that they’re not allowed to stone anyone for taking a nap? Shouldn’t this at least be said somewhere?

When they made the movie Selena they were dealing with a tragedy and had they focused on the tragedy itself they’d not have reached the audiences they reached. Selena is one of the most widely watched movies and particularly in most, if not all, Spanish homes there is either a copy of the movie or somehow the girls have watched it over and over again. The tragic part is at the end and a very small part.

You can neither expect the Saw crowd to see this movie and “enjoy” it nor can you play to people’s emotions and expect Oscar nominations just for the sake of the subject matter. When they make all these Holocaust movies, one won the Oscar for best picture in Life is Beautiful, they focus on a life that is parallel to this tragedy not the tragedy itself which is known to everyone. The last scene of the stoning scene with blood and stones around would have been enough.

This movie didn’t even pay attention to how the cast members looked. They seemed out of place with outfits which seemed to have been designed by the likes of Armani or Versachi for an urban setting not the rural Iran. Some were also clean shaven and well groomed. It looked like they tried to use the outfit used by the girl in The Ring to dress the victim which by the way she was supposed to have been draped in white not dressed in white. Now if this wasn’t the case and the villagers were eager to see her die and bleed in front of them, again there could’ve been a discussion about whether she should be dressed this way.

Or when towards the end the journalist who is supposed to take the cassette tape out of Iran, is surrounded by machine gun wielding revolutionary guards, suddenly escapes in his LADA (YOGU’s step-father 🙂 and the only thing between him, his LADA and 2 machine guns are Aghdashloo’s chador (veil). Yeah right these guys went to great length to steal all the journalist’s belonging and were shy or timid on going after him for the main cassette that they were looking for in the first place! Although I give them credit for casting LADA in the first place. There were few Ladas roaming around in those days!

The best line of the movie was when the victim was to say her last words and she said شما‌ها چتون شده which loosely translates to what the hell have gotten into you? And she went on to say more about she is a daughter, mother, sister and a wife …

I really wished a movie about stoning in Iran would reach large audiences and garner a lot more controversial comments than the movie 300. Recent history has shown that Iranian people are mostly for banning this practice and even officials have tried to put a lid on it or make it harder for local Mullahs to issue this sentence.

When I heard this movie was coming out and Aghdashloo was playing in it I was impressed and hoping for good reviews and larger audience. It is something when people are looking for Oscar nods or recognition when there wasn’t even a good enough reception from the public, $665,647 at the US box office. I understand it won several International awards.

In the end Aghdashloo and Parviz Sayyad played superbly and I’d give them 5 stars, the Soraya character (Mozhan Marnò) played well too. Adapted screen play 2 stars, costumes 2 stars, picture 3 stars and overall 3 stars. Especially 3 stars for us Iranians to watch this movie when you get a chance and a stomach for it. It is in Farsi with English subtitles.