In Defense of English 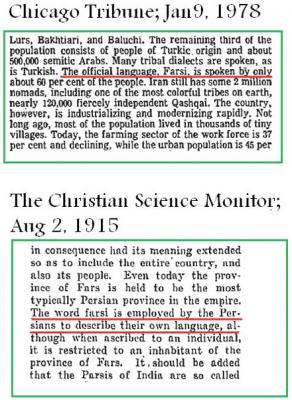 In response to “Farsi or Persian? Again.”

As far back as January 9 1978 native English speakers used the word “Farsi” to denote the language spoken in Iran. I make this assertion because I contacted the Library of Congress for references to the word “Farsi” in general interest American newspapers prior to the 1979 Iranian revolution. The top image above is of page E10 of the Chicago Tribune dated January 9 1978. The writer says in the column on Iran, “The official language, Farsi, is spoken by only about 60% of the people.”

So how far back does “Farsi” go as a non-technical English word? Not as far as August 2 1915. In a Christian Science Monitor column of that date (bottom image), the writer says, “The word farsi is employed by the Persians to describe their own language.”

How did “Farsi” end up being an English word sometime between 1915 and 1978? Unknown at this point. I propose researching unclassified Iran-related State Department memos of the Shah period to see if the large number of Americans working in Iran during that time adopted the word into their native English. This research has not yet been done, nor has any other hypothesis been tested. To spell it out, any articles or mass emails to date citing academic sounding reasons for the purging of “Farsi” from the English language can be dismissed as unsubstantiated.

My motive for writing this: I am a writer in the English language. The rich English vocabulary with many synonyms for each word is part of our toolkit. This beautiful and versatile language deserves being defended against imported ignorance. Many of us would feel just as protective of our Farsi and just as insulted if unwelcome missionaries came to our doors to preach against one of the words we like to use.