If she was alive now 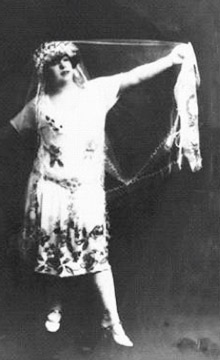 Discussing an article we had read about the Iranian legendary singer, Ghamar-ol-Mokook, my friend said, “I wonder what would happen if she were alive today?”

Indeed. What would happen to a great performer, a lover of music, not to mention a woman with Ghamar’s free spirit in the Islamic Iran? The thought wouldn’t leave me for the rest of the day. In a twisted way, I realized that she did live in today’s Iran, albeit a hundred years ago! The article clearly indicated to such fact. “In those days, any woman without a proper hejab would be arrested.” Amazing how the passage of a century has failed to pave the way for the Iranian woman.

I began to count the ways in which Ghamar might feel at ease while living, even performing, in Iran today. Accustomed to birooni/andarooni, she’d be used to singing her sad songs while hidden behind the thick wall that separates women’s quarters from men’s. She would not dream of a larger audience and the fact that loud speakers are only used for sermons performed exclusively by men would come as no surprise.

Many of the inconveniences that currently suffocate the modern women of Iran would be second nature to Ghamar. She didn’t work in an office nor did she pursue higher education. Leisure time to her meant a ladies’ tea party. She didn’t swim, ski or play tennis and I’m sure she did not sunbathe on the shores of Caspian. To a young woman locked-up in “andarooni”, dance clubs, cabarets, and casinos were either nonexistent or admitted men only. Her strong voice, would probably earn her the highest pay for her performance at Rowzeh and she could definitely be the star of ladies’ funeral services. Occasionally, she’d sing at weddings, that is, in the section provided for women. Still, nothing would tame her desire for musical excellence and she’d persist on learning more.

I imagine the young singer reincarnated and, as I picture her “coming out”, I try to get past the extremes. Her 1920s attire would still be attractive, and at a time when the world embraces the likes of Lady Ga Ga, the wreath in her hair is negligible. However, following a few arrests and her torturous encounters with the Islamic “sisters”, it would soon be clear that she’d need to flee the country.

Where can she go, and speaking only classic Persian, how would she deal with language barriers? She decides to move to LA, where she’ll be amongst peers, and like millions of other Iranians, survive without bothering with a “foreign” language. Alas, she’s soon to discover that life is not easy for an immigrant Ghamar.

As if it wasn’t hard enough in Tehran, where she had to learn the meaning of expressions such as Javad, Khali bafee, or leh, now she needs to study English to understand the Iranian’s Finglissi. Even the musician, whose tar accompanies her Morgh-e-sahar with utmost precision, throws in words such as okay, higher, and sync.

Also, what is she to do with a name like Ghamar-al-Molook-e-Vaziree? Should she become Gigi Vaz? Or Molly Ree? Or perhaps it would be best to simply translate and become The Mooni Lady? Tough choices.

To make matters worse, her agent advises she must update, by which, he means assume a more modern appearance and accept the fact that young people may not appreciate her musical genre.

“So what if they don’t?” a frustrated Ghamar responds. “There are plenty of Iranians, who appreciate classical Persian music.”

“True,” the agent says with a sigh. ”But it’s the young who bring in the money, buy the CD’s, the DVD.s and go to concerts.

Resigned, our young singer returns to her solitary room and imagines the possibilities while studying her features in the mirror. What’s wrong with my appearance? And the answer stares back through her reflection: She’s in desperate need of a nose job – not to mention eyebrow tattoo – and her hair requires serious straightening. Plus, if she really wants a career in show business, she’ll need to use a lot more makeup than plain rouge. “And . . .” she says standing sideways, “I could do with a bit of boob enhancement.”

She’s slowly discovering the new meaning of change, maybe more in the free world, but even back in Tehran she had noticed that change is inevitable, even where the authorities do their best to prevent it.

Ghamar finds her place among music-loving Iranians, even though her performances are limited to specific gatherings. Money begins to pour in, but that’s not what she wants and in fact, even back then she used to give it all away. She has a fabulous voice and a passion for pure Persian music. All she wants is the freedom to work with masters and the freedom to perfect her art. But a singer needs the right audience and she is about to realize her time has passed. Most listeners love her “Avaz” and even seem to appreciate “Morgh-e-Sahar”. However, that hardly seems enough. At weddings, those who’ve been waiting for the dance floor to open can hardly wait for the DJ to take over.

Although I consider myself an optimist, here I have no choice but to give up. Deep inside, I still want to believe that if Ghamar lived today, she might become the Susan Boyle of Iran. But in a real world that’s only a dream. While we Persians have turned into Irooni, speak Finglissi, and our music is mostly Shish-o-hasht, a sad songbird such as Ghamar would face as many problems today as she did back in her time.

For the umpteenth time, I think of all those whose life ended long before they could see the change in their homeland or experience its tragic aftermath. Now I wonder, could that be their reward for having been good?