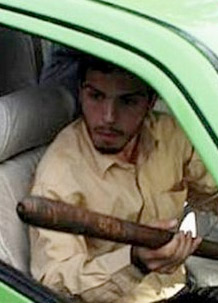 I was going to be late, I thought, looking at the smoke rising above the crash scene, only a couple of hundred meters ahead.

I hated Tehran and its endless morning jams and its arrogance toward anything that wasn’t yet infested with its indecency. I despised its vastness, its shine and poverty, its marbled mansions and cardboard houses, its lined trees and messy roads, its high towers and those doormen who waited for the tenants to show up so they could bend their backs low, to crawl on the ground fishing for some dishonoring coins. I couldn’t stand its people and their snobbish walks and their patronizing attitude. Their laughs, their gestures, and how they couldn’t mask their hate when we drove by them in our green jeep, and how they all held the same look at me, the look of disgust and dread, like I was a leprous monster.

The car behind me kept honking as if it was on fire. I looked back at its young driver and his shaved face. Voila another soossool, another spoiled brat driving his dad’s Mercedes. I rolled down the window and cursed his mother and sister and his whole family, but to shut his mouth, and to stop his white chubby fingers pressing the car horn for good, I had to wave my Basij Special Unit card at him, so I could relax a bit while being late to my meeting with my future boss.

A few drivers left their cars out of curiosity and joined the pedestrians gathered on the sidewalk, watching the victims of the car crash, pretending to be compassionate, calling out for water or clean sheet. The sound of the ambulance and the sight of the huge tow truck coming from the opposite side, followed by a police car and the city workers’ green minibus, stopped all the honking. The road was going to be cleared up soon. The injured were going to be carried to a hospital, and the dead were going to be washed in a morgue. The woman driver in front of me left her car, a cigarette on her red lips, leafing through her book as if she was stuck on the Champs Elysee. The silence fell around me, as all the men forgot to be merciful or god-fearing, their eyes glued on the book-reading whore with gray teeth.

I turned on the radio, and dreamed of beating up Tehran’s anti-god semi-intellectuals, smart asses who wore farangi brands, who grew up in Suisse, who knew French and Italian, laughed in English, and spoke Persian with an accent. I was appalled at the sight of Tehrani girls who wore tight dresses, short pants and small scarves just to show off their bodies and their immodest bareness. They all looked the same. The same makeup, the same cut face, the same sinful glare. Like plastic dolls. Like sex toys. No wonder they didn’t suspect who I was, as long as I shaved and dressed clean and had a nice car and bought them good food, or cheap gold. But as soon as I showed them my badge, they always cried the same way with the same fakeness, and they all tried to hide their apprehension with the same fabricated remorse, the same lies, the same pettiness.

But how could I have guessed that my Zora too had turned into one of those whores.

Like this smoking sister in front of me, I thought, remembering how we had cleansed Kerman of these parasites, these rotten evil-lovers, these hell-goers. If only I hadn’t fallen in love with a ghost, or hadn’t arrested that girl who looked exactly like Mother, and like my Zora, if only I had kept my cool that one time, I wouldn’t have had to prove my sanity, I wouldn’t have had to leave my city, my home, and I wouldn’t be here, on this road, among so many losers.

I felt like choking and unbuttoned my collar. My armpits were sweaty. I was going to stink like a skunk, and opened the car door. The cold breeze wafted in, the fog over the windows dispersed, and the shape of the woman leaning against her car – right in front of my eyes – reminded me of Zora. A long shiver ran through my spine, and I spat out the bitter taste in my mouth.

When Haj Agha offered me this job, I was so excited to be able to show him my devotion and everything else. I wanted him to know that it wasn’t just a job for me. That I wasn’t like other Basijis who did it for a living, because their families were dying of hunger, or their wives needed a new chador, or their mothers had sold them for a bag of rice or two, or their fathers had raped them while teaching Koran and now they had to live with this indignity forever.

Last night, when we got to that rich neighborhood where that faggot, that rich boy, lived I couldn’t believe my eyes, finding Zora, the love of my life, standing half naked, hand in hand with that bastard. How could she do this to me? To our family’s honor? If Haj Agha wasn’t there, I could have taken her life with my own bare hands. I’d have smashed her face, broken her fingers, stabbed her neck, hung her corpse, tied her filthy body to the jeep, and I’d have dragged it on the ground, all over her damn new city, just to teach her a lesson. But my boss was watching me, so I just saved her life. “She’s my step sister,” I uttered, calling her a half sister to hide my shame. “Leave her alone. I’ll take care of her.” Haj Agha just looked at me with a blank stare without giving me advice or asking more details and I should have shown more gratitude for his discretion and understanding, but I was so stunned at finding my little sister in that brothel – afraid that she could hear me – that I remained quiet like a retard and it was her fault.

Was it God’s will or my misfortune? I’m not sure. But not only Zora didn’t hear what I said, she didn’t even recognize me. She didn’t apologize or cry or thank me when everyone else was pushed into our bus, when I covered her with my jacket, when I drove her back home, when Aunt Maryam opened the door and hugged her, avoiding my stare, and when I left without asking them for money, without letting them know who I was and how good I was to them.

No. Nobody thanked me. Nobody seemed grateful for my kindness. Nobody noticed my incredible act of mercy.