Woman from a Man’s Point of View 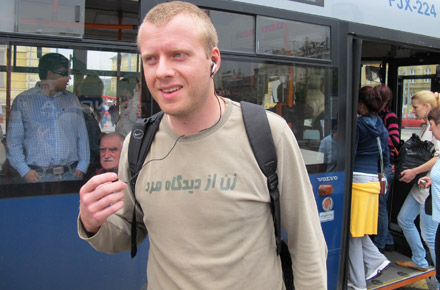 A man passes by at the entrance to the Keleti train station in Budapest. He doesn’t look Iranian. (For one, he’s blonde.) So why is he wearing a shirt that says “Woman from a Man’s Point of View” in Persian?

When asked, he says he has no idea what the words mean. When he hears the translation, he looks slightly perplexed. His face says: “Who are you? Why are you so excited about some words on a shirt in your language?”

There’s no chance to chat with him. He catches his bus never to be seen again.

This all happens in a matter of seconds.

Who dreamed up these shirts and produced them?

How did they end up in Hungary?

Did this man receive it as a gift?

Did it originally belong to an Iranian in Budapest who donated it to a thrift shop and then this man bought it?

What is the “artist” trying to say? “Woman from a Man’s Point of View”?

Why do we care?