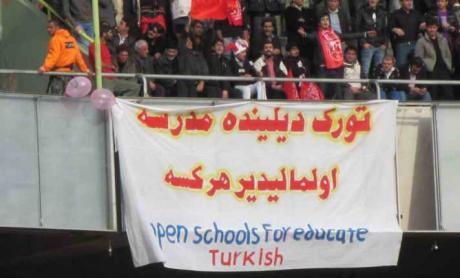 So, now most Americans are up on their Football (aka Soccer) basics—i.e., the World LOVES Football and for some tis the almost the air they breathe, just ask the South Americans or even the Africans! In Iranian Azerbaijan, they love their football, but more importantly love and want equal rights with the dominant Persian group. Enter the Tiraxtur FC.

A top team that gathers a crowd—this video claims more than 120, 000 in and out of the stadium—founded in 1970 with the official name Teraktor Sazi Tabriz Football Club. Yes, there are several variances to the name, but my Azerbaijani sources tell me they prefer to use (and spell) as Tiraxtur.

ADAPP News disseminated the news of yesterday’s protest in Tabriz. (Click here to subscribe!) The first media article (there are several citizen-sources) is available at and I’ve also included it below.

The gist of this story: Azerbaijanis are tired, frustrated, and simply just want the same rights we all enjoy. The Government and the dominant Persian group owe them at least that much. However, hope on this might be dim as the Tiraxtur team is prohibited from having fans in attendance for its next two matches. Something tells me fans will find another way to support and demand equal rights. And here’s hoping the international community hears their voices.