Has this woman gone mad? 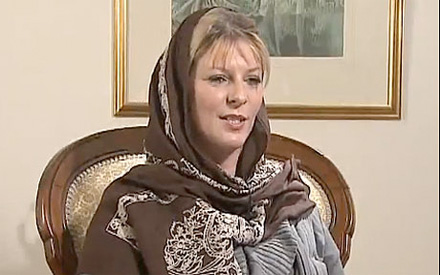 Freedom of speech is a funny old thing. In the Islamic Republic it’s pretty much outlawed – yet in a leafy suburb of west London, Press TV, the broadcaster it controls, is allowed to operate freely.

This week, however, the UK’s broadcast regulator Ofcom rapped pro-Palestine campaigner Lauren Booth (pictured) – Tony Blair’s sister-in-law – for not showing ‘due impartiality’ in an edition of the Remember Palestine programme she fronts devoted to the Gaza flotilla incident. “Can you believe this,” the mullahs will say, “they want us to show Jew impartiality”.

If you ask me it’s time to shut Press TV down – not for breach of impartiality rules (it’s a propaganda channel for goodness’ sake) – but because its Khomeini-ist ethos forces poor Booth to wear a headscarf in order to do her job, lest her blonde locks and bare arms inspire undue partiality among certain viewers.

Booth is an outspoken critic of Israel who, like many on the British Left, misguidedly stands with the Islamic Republic, a keen backer of Hamas, in defending the rights of Gazans.

In donning the hejab, she is kowtowing to the very fundamentalism that holds the fate of Sakineh Mohammadi Ashtiani in its hands — Ashtiani is the 43-year-old mother, accused of adultery, who would have been stoned to death in recent weeks were it not for the international outcry (her death sentence remains – Brazil’s President Lula appealed to his friend Ahmadinejad: “If she is causing problems there, we will welcome her here.” “Sure, we’ll just run it by rapist-in-chief Mr Khamenei and buy her a one-way ticket to Rio.”)

To use the language that Booth might to describe Israel’s excesses, it is shameful and disgusting that she a) works for Press TV and b) agrees to wear Islamic headgear on screen.

From her Press TV colleague Yvonne Ridley, you would expect such behaviour – the former Express journalist is a card-carrying Islamist (a sideways move).

You would expect it even from the bearded former Respect party MP George Galloway. At his Iranian paymasters’ behest the shameless showman would surely don a head-to-toe chador in the name of solidarity with his Muslim sisters in Iran, wearing a skimpy red leotard underneath, as he did on Big Brother in 2006 (to be fair, he wore a suit when he spoke at an expat’s business conference in Tehran this week — in the exalted company of Mahmoud Ahmadinejad).

“I am a Palestinian,” says Booth. No Lauren, you’re not. You’re an employee of the Islamic Republic of Iran, a country that uses rape as a weapon to crush dissent, kills and tortures bloggers, writers, demonstrators and, of course, any women who dare to defy its strict hejab laws. In struggling for Palestinians you fail to see that aligning yourself with a government that is as brutal as Israel at its worst is morally bankrupt.

Booth, of course, is not alone. Stop The War Coalition, arguably the UK’s most influential leftwing organisation, remains firmly in bed with Islamists — it is very vocal about defending the rights of Muslims but curiously perfunctory when it comes to hitting out at the Islamic Republic. It’s left to the Murdoch press to defend the rights of a woman sentenced to a medieval punishment for a crime she denies committing, as The Times commendably did last month.

In 2008 Channel 4 aired a Christmas Day speech by Ahmadinejad as the Queen addressed her subjects on the other side. Iran’s clerics watch Question Time and BBC Breakfast — they know fascists are welcome on TV in Britain. This is why the Ofcom ruling should trigger the closure of Press TV. We’ll be a step closer to keeping fascists off our screens and, in the process, can help emancipate Lauren Booth from the pay cheques she’s bound to.