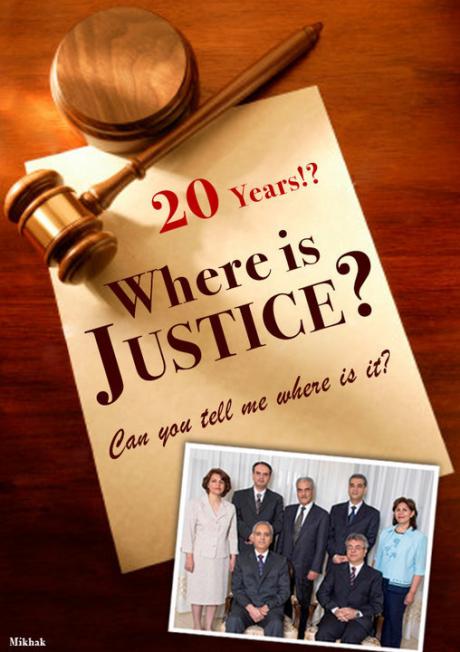 In early August 2010, after over two years of detention, Iran’s 7 Baha’i leaders were sentenced to 20 years prison.

Considering the advanced ages of several of these spiritual leaders, the IRI has effectively dealt life sentences. These two women and five men formed the national leadership of the Baha’i community in Iran, known as ‘yaran’ or ‘friends,’ to tend to the spiritual needs of Iran’s largest religious minority. The Baha’i community faces systematic oppression and discrimination by the IRI, including denial of education and government jobs, home raids, arbitrary detention, cemetery desecration, and much more.

“As a Bahá’í I was deeply saddened to hear the news about the 20 year-prison-sentence dealt by Bahá’í leaders in Iran. The Bahá’ís of Iran are the most diverse minority group in Iran. Bahá’í faith, being the youngest of world religions, has members from different ethnic backgrounds – including Kurdish, Azeri, Balochi, and Turkmen.  Iranian Bahá’ís also come from Muslim, Zoroastrian, and Jewish backgrounds.  Members of the Bahá’í faith have unconditionally served their country from the inception of the Bahá’í faith.

These seven Bahá’ís were charged with engaging in “propaganda against the Islamic Republic of Iran” and “propaganda against Islam” – all of which are contrary to the teachings of the Bahá’í faith, which requires its members to abide by and respect the rules of the country in which they live, respect all religions, including Islam, and strive for unity of religions.

The IRI has declared illegal the administrative work of the community despite having a clear knowledge of the actions of the Bahá’í community for the past thirty years.  Bahá’í institutions in Iran were disbanded in 1983, and the seven leaders who now face 20-year-prison terms formed an ad-hoc group that looked over the affairs of the community, including marriages, funerals, and monthly feasts. All this happened with the government’s knowledge.

It is really unfortunate to see that the nuclear dispute continues to overshadow severe, broad, and systematic human rights violations by the Islamic Republic, the ongoing oppression of minorities, and state of thousands of prisoners of conscience in Iran.


As an Iranian and a Bahá’í, I would like to encourage everyone to send letters to world leaders and IRI officials asking them to condemn the ongoing human rights violations of Bahá’ís and other prisoners of conscience in IRI prisons. Supporting these Bahá’í prisoners today and sending letters to world leaders on their behalf shows the government of Iran that Iranians and non-Iranians are working in solidarity with one another to address the human right violations of all Iranians irrespective of their faith, ethnicity, and ideological backgrounds.”

To access the letters, see the links at the top of the page OR scroll down further. If you choose to add a personal message to the e-letter, please keep it polite, human-rights focused, and without rhetoric. To the right of the e- letter page are the various recipients of the e-mail you send — this way you don’t have to send a letter multiple times (one click will send your message to all of the listed embassies, consulates, interest sections, IRI authorities, and UN officials).

Below the letter are personal fields to fill out. Enter as much information as you feel comfortable. A VALID e-mail address is required; however, if you don’t feel comfortable sharing your e-mail, consider making an e-mail account just to use for actions like this.

If you have any questions, feel free to e-mail us at info@united4iran.org