Unity of mankind, I have place and work for all the Iranian in Athena 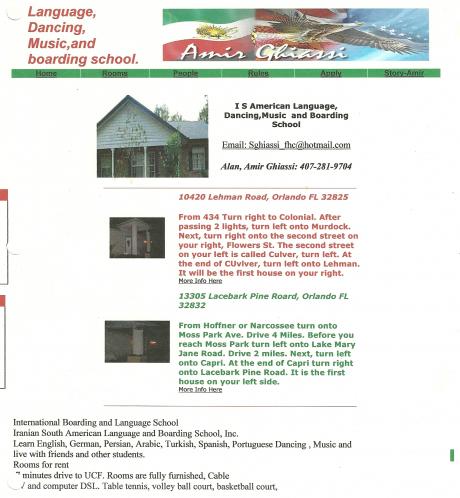 Only if we are united we can survive.

In the time I was students; some of the Germans do not want to rent me a room, because they had bad experience with the Middle Eastern Students with the German girls. I wanted to have a boarding for Iranian or other students to live there and be safe and comfortable. I opened this boarding school in Orlando now and it is the house of Iran and all students are well come. They can work, study and live here. That is a none profit organization and it does not even pay its cost. Also this is not a business and I do not have any support from churches, mosques or government. 4072819704 . I have work and place to live for all the refugee in Athena who have difficulties, in Greece.

Some times the life and people are hard to understand. Everybody says my believe is the best and the right one and other people are wrong, because they have other believe. We cannot answer the question of life and we are weak and nothing in compare with the worlds. But we are selfish and we think we stay in the world for ever; we make the life of other people harder as we can, why? In the world there are different cultures different people and different religions, and they born and grow with that culture and religion , why we want to change it by force and killing? The rout is that the business huge companies want to make money with our hate, and sell their weapons to us and gave our youth drug. The only problem we have in Iran is Bahais? We do not have people without work, university, home any more? We have enough work, universities, houses and food for everybody, there are not four millions without work, millions without universities, millions addicted, millions under the poverty? Our youth have the possibilities to marry and have their own family? Only these Bahais are our problem? Or the half Bahai and half Moslems are the great problem, we solve all other problem and we are in advance technique and only these Bahais and half Bahais bother us. We killed them, take out of school, burned their houses, closed their shops, but still they are bothering us. I think the half Bahais are the real victims as they are bothered by some Moslems and by some full Bahais, too. I wish one day we could live with each other in Peace and Unity. The education is the key of all these problems.

I think the half Bahais have the worst situation, they are persecuted by Moslems as Bahais and some of the Bahais are not nice to them and bother them also. We should wait for a Love Prophet? Who bring just Love and Unity and not any names any more. We are the victims of great powers and also victims among our own people, which is guided again by great powers. Hate between us is programed by them also.