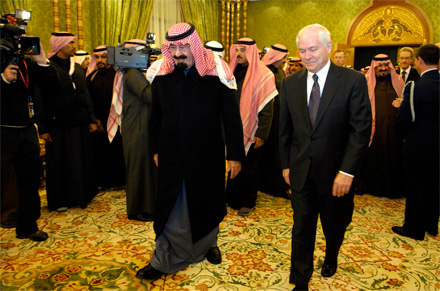 When Congress returns from its summer recess after Labor Day, the Department of Defense will provide informal notification of the U.S. intention to sell up to $30 billion in military equipment to Saudi Arabia. The likely deal is part of a U.S. commitment predating the Obama administration to strengthen regional allies in the face of a growing threat from Iran. For the Saudis, the transaction represents a clear return to considering the United States as its principal arms supplier, a position the Americans risked losing to France as recently as 2006.

Background
The roughly $60 billion price tag for the U.S.-Saudi deal was reported by Bloomberg. Jane’s Defence Weekly, which used a figure of $30 billion, noted that life-cycle maintenance and upgrades could eventually double the amount. The proposed sale includes the following:

The U.S. Defense Security Cooperation Agency will probably issue formal notification of the arms sale request in mid-October of this year. This gives Congress thirty days to call for the amendment or cancellation of the sale, allowing the U.S. administration to address the issue after the November 2 midterm elections.

Buying American
According to the Congressional Research Service, Saudi Arabia purchased (by total value of concluded deals) $4.1 billion in U.S. military products and services between 2001 and 2004 (second as a client only to Egypt) and $11.2 billion worth from 2005 to 2008 (the highest of any nation). In the latter period, purchases from U.S. sources represented 40 percent of Riyadh’s $28.3 billion in overall spending on military procurement. This high proportion is explained principally by Saudi Arabia’s need to continually maintain and upgrade the large stocks of American hardware it has purchased since the late 1970s.

New procurement deals on the scale of the proposed U.S.-Saudi agreement are very rare in today’s global defense market and even rarer in the kingdom, which, from the late 1990s onward, significantly curtailed its procurement of new weapons systems to focus resources on the maintenance and training of its armed forces. The new deal appears to reflect a Saudi perception that it must better equip itself to cope with the potential threat from Iran. An important element of such preparations is a strong defense supply arrangement with the United States.

Diversity is an additional component of the Saudis’ weapons procurement policy: in 2005 they signed a contract worth up to $8 billion for joint production with the British of seventy-two Eurofighter Typhoon multirole combat aircraft, which included early delivery of some aircraft otherwise intended for Britain’s Royal Air Force. French and Russian companies have also been active in attempting to supply Riyadh. In particular, they have marketed their ability to provide cutting-edge technology without preconditions, differentiating themselves from U.S. manufacturers, for whom limits may apply on advanced technology transfers to Saudi Arabia.

Aside from its financial benefits, the pending sale between Washington and Riyadh should achieve the U.S. objective of improving defense interoperability between Saudi Arabia and other members of the Gulf Cooperation Council, which is seen as a vital element in countering the potential ballistic missile threat from Iran. The United Arab Emirates itself plans to purchase from the United States very advanced Terminal High Altitude Area Defense (THAAD) surface-to-air missiles, and just this week Kuwait announced its plans for a $900 million upgrade to its U.S.-supplied Patriot surface-to-air missile systems.

Technology Transfer
When Saudi Arabia purchased its first F-15C/Ds in 1978, the United States imposed restrictions on the numbers of aircraft the kingdom could use at any time (sixty) and on the technology incorporated into the aircraft. As a result, the F-15S variants purchased by the Saudis in 1993 included downgraded avionics, sensors, and weapons-carrying capacity, and the Saudis were not permitted to station them at Tabuk, a major air base near Israel. Yet over time, Saudi Arabia has managed to significantly upgrade all its F-15 models in a piecemeal fashion. It has also broken free of restrictions on the numbers and basing options established for its F-15 aircraft.

The present sale of F-15s could revive debates from past years. Details of the new F-15SA (Saudi Advanced) have not been made public, but according to the Wall Street Journal, “U.S. officials say the F-15s in the package will be ‘very capable’ aircraft, comparable to the F-15s flown by South Korea and Singapore.” This means Saudi F-15SA aircraft may mount very advanced sensors, such as the Raytheon APG-63(V)3 active electronically scanning array radar. The acquisition could thus put Saudi radar capabilities ahead of Israel’s, unless Israel compensates by negotiating the purchase of Lockheed Martin F-35 Joint Strike Fighters or F-15 upgrades. Saudi Arabia may also seek advanced precision weapons such as the Boeing AGM-84H Standoff Land Attack Missile Expanded Response (SLAM-ER) or the Lockheed Martin Joint Air-to-Surface Standoff Missile (JASSM), with ranges of 170 km and 370 km, respectively. Opinions differ over whether such so-called standoff weapons will be offered to the kingdom.

Implications for U.S. Policymakers
The United States has much to gain from Riyadh’s requested arms package. The deal will strengthen the U.S. defense sector by providing needed revenues, job protection, and market share. And the present request has many possible sequels, with Riyadh considering large purchases of American transport aircraft, tanker aircraft, maritime patrol aircraft, as well as the future replacement of its U.S.-supplied F-15S and British Tornado strike aircraft.

Just as important, the deal marks a key test for U.S.-Saudi relations and the nations’ joint commitment to deter the Iranian threat. Along these lines, the Saudis have reportedly deferred their discussions with France concerning a nuclear research program, providing an opportunity for the United States to demonstrate a means alternative to development of nuclear technology by which Riyadh can signal firmness to Tehran.

Riyadh is fostering an ever-expanding range of military-to-military ties with states such as Turkey, Pakistan, India, South Korea, and Russia, making it a useful ally to the United States as it seeks to devise a regional containment strategy for Iran. Through its habit of making arms purchases to establish political leverage, Riyadh may be able to wield influence over other potential military suppliers to Tehran such as Russia, China, and states of the former Soviet Union. In particular, Saudi Arabia has reportedly expressed interest in the Russian S-300PMU-1 surface-to-air missile, but with the condition that it not be supplied to Iran.

Finally, the Israelis have apparently taken heart that the new equipment headed for Riyadh is intended to boost defenses against an Iranian threat. According to U.S. government sources quoted in the Wall Street Journal, anxiety about the arms request by Israeli officials “diminished the more they’ve understood what the configuration [of the proposed sale] look[ed] like.” An Israeli worry has been that a Saudi pilot could fly on a suicide mission, crashing into an Israeli city or hitting a strategic target such as the Dimona nuclear reactor. Stoking such fears, al-Qaeda this week released an audio recording from the deputy commander of its branch in the Arabian Peninsula (AQAP), former Guantanamo detainee Said al-Shihri, instructing sympathizers in the Saudi armed forces to assassinate King Abdullah and Western citizens and “seek martyrdom in the skies of Palestine.”

While security concerns will likely persist, Washington’s focus should be on diplomatic support for its allies and efforts to strengthen them against Iran. To this end — and before this latest deal is finalized — Washington should encourage Riyadh to participate more actively in the U.S.-led regional security infrastructure. Such a step would answer the complaints of U.S. officials that Saudis attend the meetings but do not take a leading role.

AUTHOR
Michael Knights is a Lafer fellow at The Washington Institute, specializing in the military and security affairs of Iraq, Iran, Yemen, and the Gulf Arab states.