Pakestan: Proof having a Bomb is Sheer Stupidity! 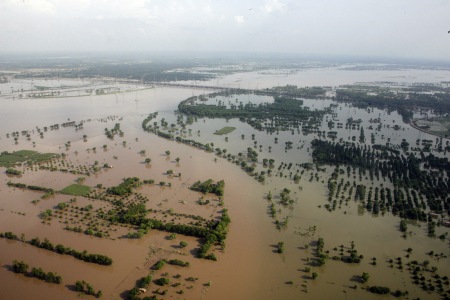 As sad as it is to say, the ongoing flood disaster in Pakestan is the best proof that acquiring a bomb is utterly stupid, and a huge waste of precious resources of a country struggling to become barely developed.

I wonder what the 20 million people who have been killed and displaced by the rising flood waters of the Indus river, think about their government’s choice?

Should the Pakestan government have invested the no doubt billions they spent on a bomb, or should they have instead used that money to develop a flood management plan? While India’s impending nuclear attack on Pakestan might happen one day, or it might never happen, the mightier Indus floods like this every single year with eery clockwork regularity.

Is the Pakestan government that disconnected from the real needs of it’s people? Have they been that deluded to actually think that India, a country that still today cannot feed it’s own people, would ever embark on the utterly pointless invasion of an utterly useless country like Pakestan? And that delusion of grandeur needs a nuclear bomb to deter it?

Of course, the answer is Quite Possibly. Although it now certainly appears that more than a few people in Pakestan’s government think that the cost of a bomb to deter the slightest minuscule chance of an improbably invasion by India, is far worse than a national flood control program.

As much as the Indians or Pakestanis might value the disputed region of Kashmir, more famous for it’s goat hair than it’s people or strategic value, it is never going to be important enough to overshadow the dead and homeless from this year’s rain.

What this shows as clearly as mass death and destruction can show, is how a rogue and corrupt and out of control government making selfish irresponsible and irrelevant decisions, can with utter disregard for what is in the best interests of its citizens, mis-manage their real priority, namely the safety and health of it’s people.

Sadly still, worse even, because we always seem to be our own worst mortal enemy, this same deluded idea goes for Iran today as it follows in the misguided footsteps Pakestan has so clearly laid out. As the impending earthquake in Tehran that is guaranteed to kill upwards of 700,000 proves, Iran’s government too, has the misguided and over inflated image of itself. The idea that with 700,00 people at risk of death in the over populated 16M Tehranis, the priority now is to threaten Israel with a nuke to get them to release their grip over Palestine, reads like a bad Stallone movie script.

Misplaced priorities and the glee with which this irresponsible Iranian government enjoys poking Giants and their minions in the eye with sharp rhetoric and idle (idol?) threats, overshadow Iran’s real responsibility, namely protecting it’s people from almost certain harm. Almost guaranteed harm as the annual earthquakes in Iran continue to kill year after year.

Given Iran’s current lack of any real state of the art plan, no a real plan that you would pay a consulting company for, to deal with the aftermath of an almost certain devastating quake to hit Tehran any day now, the “let it happen and we’ll figure it out later” approach to this, is nothing short of criminal.

But this is just what we’ve all become quite used to as merely par for Iran. In this New Iran, where planning and action and preparation and technology and solutions has been replaced by an almost voodoo pagan “Whatever God wishes” (Har Chi Khoda Bekhad) and rules the day everyday in Iran.

And of course everyone colluding in this grand delusion would agree that it is far better to waste billions and build an un-holy bomb for fun and to make Israel nervous, instead of plan for something as holy as an earthquake.