Response To Tehran Bureau’s article: What Has the Green Movement Achieved? 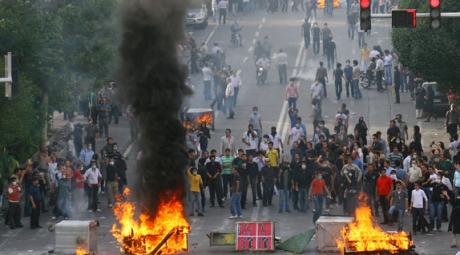 The following is my comment to Tehran Bureau’s article titled: “What Has The Green Movement Achieved? “ http://tinyurl.com/24cfsch  which while I agree with most of the content, I also disagree with the general analysis of relating the entire post- June election uprisings in Iran to the conflict between the so-called hardliners & the so-called reformers, which is not true and that’s why “Tehran Bureau” censored my comments.

The green movement has achieved a lot, but not through the help or leadership of the so-called reformers (which in reality acted as a damage control to avoid any major pressure on the regime that may lead to regime change), but through the courage of the Iranian people who took to the streets and protested, even confronted the brutal and fully armed thug regime by their own bare hands to delegitimize and expose the Islamic Republic while expressing to the world that how different the Iranian people are compare to the Islamic occupiers of the Islamic regime.

I do agree that the majority of Iranians thought Mousavi & the reformers would stand by their sides and help them to achieve freedom and democracy in a more peaceful way than a revolution. Many at the time believed that the system can be transformed from within, but after a year, the movement has learned a big lesson, that what the reformers care about the most is saving the system and the majority of Iranians believe that either the reformist-hardliner conflict is either a show or over their own personal and political interests, not the interest of the people which is real democracy, equality, justice and human rights. When the reformists consider Khomeini as their idol, claim that the IR is not “Islamic Enough”, urge loyalty to IR’s barbaric Sharia based constitution which is in exact opposition to human rights and democracy, that’s the same as being in opposition to the people and defending the regime.

Almost anyone who wants freedom & democracy in Iran has now convinced that it’s only achievable through regime change.

Meanwhile, the traitors censored their voices to make it seem it’s a struggle between the two fractions of the regime and not the Iranian people Vs. the Islamic Republic.

That’s true that the green movement originally started under the excuse of election frauds, but it was an extension of th e”student movement” that started in the 1990’s in opposition to the “now self-claimed reformer Rafsanjani and Khatami” era dictatorship and it’s not about the opposition between the so-called hardliners and the so-called reformers.

The green movement is the movement of the Iranian people fighting against the 31 years of Islamic dictatorship in Iran.

The conflict between hardliners and reformers has nothing to do with people’s demands. As a matter of fact, most the Iranian people are in opposition to the Islamic republic, both the reformers and hardliners. The green movement is s secular democratic movement.

Unfortunately, the media has been hijacked by Islamic republic to portray the movement as a movement belong to Mousavi and the reformers to avoid a real international solidarity with the Iranian people.

The Iranian protesters chanted “Obama, Either with Us or the regime” اوباما. یا با ونا، یا با ما which means they desperately asked for help from the international community. Also the first week after the elections we heard the slogan ” Mousavi is an excuse, the whole system is the target” موسوی بهانست، کل نظام نشانست.

Mousavi, was more critic of the demonstrators than their supporter. For example he condemned insulting to the “picture” of Khomeini, the most hated butcher in Iran’s modern history and the one who ordered the biggest political genocide since WWII http://tinyurl.com/359jsvr. . A man who resulted in the death of millions of Iranians when he refused to end Iran-Iraq war, the man who gave children keys to heaven so he can use them as suicide minefield cleaners. Or when he opposed the slogan: “Neither Gaza, neither Lebanon, my life sacrifice for Iran” calling it against Islamic ideology of the regime. He even opposed Ashura demonstration which turned out to nearly topple the regime!!
The most effective way peacefully pressuring the regime is financial and oil sanctions against the regime and the so-called reformers are oppsed to it, because multi-billionaire mullahs such as Rafsanjani have a huge interest in regime’s financial empire and sanctions on regime in reality weakens the entire regime and give the better chances to the people in long term.

In all the demonstrations, the Iranian people chanted slogans such as “Freedom, independence, Iranian republic” taking out Islamic from the slogans which means secular republic or in other words regime change and the so-called reformers also criticized that!! The chant “Death to the roots of the Islamic Republic (velayet faqih)” مرگ بر اصل ولایت فقیه and again reformers opposed that and people continued the slogan even stronger the next time.

Another thing to add is that yes the CIA helped the Iranians stabilize the government after they realize that the Soviet backed Tudeh party was trying to take over the country, taking advantage of the division caused among the Iranians by Mossadeq, but alos the same CIA under the order of president Jimmy Carter brought Khomeini to power http://tinyurl.com/359jsvr . The CIA under the order of Carter and the liberal left masterminded the 1979 revolution in Iran by airing propaganda in favor of Khomeini and against the Shah, infiltrating Iran’s government and giving financial and all other types of support to Khomeini. Now as most Iranians have been saying for years when whispering about their disagreement with the regime and desire for regime change, whoever brought these mullahs to power, should help us remove them, too هر کسی این آخوند ها را سر کار آوده، خودش هم از سر کار برشان میداره(حرفی که مردم در کوچه بازارهای ایران ۳۱ ساله میزنند) .

What Has the Green Movement Achieved?
by MUHAMMAD SAHIMI in Los Angeles

Numerous successes widen hardline fissures, keep regime on defensive.
[ analysis ] The Green Movement is over one year old. The large street demonstrations and gatherings, both before and after the rigged presidential election of June 2009, that gave birth to the movement, have largely ended. The world has shifted its attention back to Iran’s nuclear program and away from the struggle by a large majority of the Iranian people for a better society. Disappointment and even hopelessness permeate a small, but significant, segment of Iranian society, both at home and in the diaspora. We must ask, Is the Green Movement still alive or is it dead? If it is still alive, what has it achieved, given the heavy price that Iranians have paid over the last 15 months?

Posing these questions to members of various groups yields different answers. It is necessary to first understand how Iranians — at least those actively participating in movement-related activities or who follow developments closely — view the present state of affairs.

In my opinion, the active Iranians may be divided into three groups:

One group consists of those who believe that the movement has had many achievements, is gradually broadening its appeal, and has succeeded in cornering the ruling establishment. This group is of the view that the quest for a democratic Iran is not a sprint but a marathon. It is opposed to any foreign intervention in the struggle between the hardliners and the rest of Iran. It is opposed to almost any type of sanctions and, most importantly, to any military attack on the country.

In the second group are those who take a dimmer view of the situation. This group believes that, while the movement has had some achievements and is still a viable force, it is still too weak and needs the assistance of the outside world. This group thus supports the imposition of certain types of sanctions to weaken the ruling establishment and its hardline supporters.

In the third group are those who believe that the movement is dead. This group never truly believed in the movement, although it seemingly supported it for a while when it appeared to be on the verge of overthrowing the Islamic Republic. Most Iranians in this group actually believe in the violent overthrow of the current government which cannot be accomplished without the intervention of foreign military forces. In short, most people in this group are those who have been advocating regime change, in a manner similar to that which deposed Saddam Hussein. People in this group totally reject the leadership of Mir Hossein Mousavi, Mehdi Karroubi, Mohammad Khatami, and Dr. Zahra Rahnavard, Mousavi’s wife. This group largely consists of supporters of the Mojahedin-e Khalgh Organization, a significant segment of the monarchists, the so-called revolutionary leftists (orthodox Communists), and the neoconservative bloc that is supported by U.S. neoconservatives. They have no significant social base within Iran and, therefore, will not be discussed any further in this article.