The face of deceit 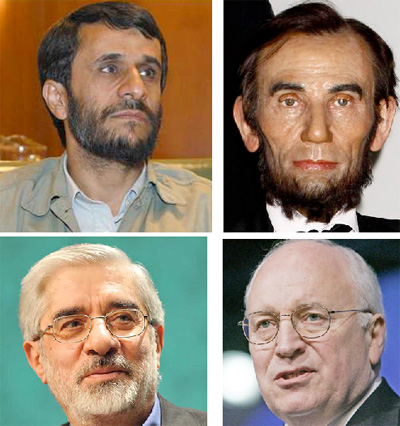 Why of all the US presidents is Abraham Lincoln known as”Honest Abe” when he was as crafty as any politician?  A study done by Michael Stirrat of the University of St Andrews, School of Psychology says people tend to trust narrow faces more than they trust wide faces. He gave folks some money and then showed them a computer generated face with a neutral expression. “You can take your money and walk away,” he told his subjects,  “or you can give it to this guy in the computer who says he can double your money for you.” Or something like that. The subjects were more likely to trust their money to narrower faced images than to wider faced images. In fact the images were of exactly the same face but morphed to look wider or narrower.The effect was found to be stronger in women than in men.

I didn’t give this experiment much thought until a few months later when a very well educated and cultured cousin asked me to look at a picture of Ahmadinejad and tell him what I saw in the face. I said “deceitful.” He said “honest.” Later I wondered why is it then that the Devil is almost always depicted as a narrow faced character. My conjecture is the following: the devil is mostly described as “deceitful,” and almost never as “untrustworthy.” Deceit means betraying a trust. The Devil’s narrow face says you  trust him at first, are seduced by him, and he ends up screwing you.