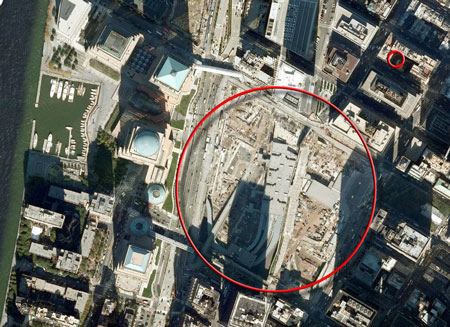 A lot of people have been writing and commenting about the wisdom and risks of putting a mosque or eslamic center at the former Burlington factory store near ground zero in NY.

The American fears are that this would grant eslam a moral and tangible victory of sorts. That eslamic extremists brought down what to them was the symbol of all that is wrong in the West, and before the last burning embers of destruction are out, a gold domed shiny mosque preaching the very same ideology of intolerance would rise in it’s ashes, an insult of a thousand insults to the families and those lost in the World Trade Center attack, September 11, 2001.

And given the very crudely defined and rough around the edges and all too fuzzy logic and nature of eslam today, this is a very real fear. Certainly the hand-picked emam to front and foil this proposal, Imam Feisal Abdul Rauf, certainly hasn’t done enough to settle the very real fears people have about the intention of the proposed eslamic center.

As a self professed (and apparently self appointed) Sufi Imam, he is the ceo of the American Society for Muslim Advancement or ASMA, an altogether different breathing disorder. Sufism, which almost all moslem officials already consider to be outside mainstream eslam, and given the fact that there isn’t really any sort of imam qualification test or even requirements, and you can sort of give yourself the title, gives Rauf about as much eslamic credibility as the name of the ground he wants to build the center on. Zero.

But even with a distant (and somewhat in-bred retarded) cousin like Rauf, having an eslamic center at or near one of the most horrific events of the 21st century (so far), is an altogether good idea. As long as. And if.

As long as the center does not condone, sanction, and support, or preach anything that goes against or counter to the US Constitution, human, and civil rights available to everyone free, here in the US.

And if the center refuses to endorse, follow, propose, promote, and agree with any reasonably debatable eslamic principle or suggestion that causes anyone harm, oppresses anyone or group, especially those who are free to express their right to not believe in eslam or god for that matter.

The advantage of a center in NY is that messages preached from the center can be monitored and reported on by a much more critical and focused press available and guaranteed constitutionally here in the US, and specifically the NY press is dogged. Often we don’t hear the irrational ramblings of key clerics outside “the bubble”.

Should anything controversial or any suggestion going anywhere near radical extremism utter from the center, it will most certainly be exposed, scrutinized and criticized. The freedom of the press that most eslamic centers are buffered from in traditional eslamic countries, will not shield it from criticism and objection, as has been done for centuries. As is being done in Taleban-controlled Afghanistan daily.

In fact ANY absurd utterings that might emanate from this center, will be held to an even higher standard of sanity, thereby assuring it does not stray toward what has disturbingly become traditional preachings of hatred and the usual “what to do with all the infidels” explorations.

Rest assured America, that the Jewish Press in NY alone, will keep a most attentive, alert and ever vigilant (as opposed to vigilante) eye on things.

Having an actual official (if anything in eslam can actually be called official) eslamic center in plain sight and view within a metropolis like NY, the epitome and bastion of for better or worse Western culture if there ever was one, will also allow the center to begin what all religions must have when trying to fit into man’s continual unabashed quest for modernization but only if it can somehow be combined with spiritualism, namely Reformation. Martin Luther, didn’t live in Rome either, when he began his own crusade of reforming the Catholic Church. Which he did. Successfully.

Yes, eslam in case you haven’t noticed, is vastly non-standard and ultimately unorganized. Loose cannon emams around the globe counter each other’s preachings, one minute calling for ridiculous notions like the adoption of sharia law by the world, to issuing mad decrees and murderous fatwas on cartoonists, and writers, and women. In many cases you can actually pay a mollah to put out a fatwa that cancels out the fatwa that was put on you, that you don’t like. Cleric corruption and unruly and uncontrolled power is certainly very high in eslam today. Oddly enough, just as corrupt as the Catholic Church was during Martin Luther’s time.

Certainly, this is not what the prophet and either Ali or Abu-bakr intended.

An eslamic center in NY can in fact begin a much needed dialog that can suggest a more moderate view on what has in my opinion incorrectly become synonymous with eslam as a result of funnily enough, the absence of any credible proof of God’s existence by his own hand. Sure plenty of mortals have claimed to have seen and heard him personally, but never has there been any indisputable physical proof or evidence of the presence of a supreme being directing all of our destinies towards any obvious greater cause. The sheer physics and mathematical tangibility of the universe, and the beauty of a flower aside.

So in absence of outright proof, moderation or reformation is the natural obvious progression of any religion. Eslam currently doesn’t have any of that. Yet in countries like Iran surprisingly enough, steps to formalize, or what I like to call “Vaticanize” the Shiite sect of eslam have been taken with at best mixed results.

The main problem with Iran’s model of modernization, is that while mollahs in Qom can get a laptop and cellphone whenever they need one, and the Qoran is available as a wiki online, Iran’s version of Shiism has been largely, mostly oppressive in terms of tradition and especially the usual hot topics eslam is famous for.

The center in NY could be a fulcrum for challenging many incomplete and often error-filled eslamic topics. But one issue in particular stands above all else in eslam, and is need of a very free and forthright admission, and immediate correction if eslam is to become the viable alternative option that it apparently intends to be.

It is not unreasonable to suggest that eslam traditionally has nothing less than trampled, then backed up and then trampled again, upon the basic human dignity and right of women as human beings in the civilized world, as well as in the eyes of a supposedly just god. The degree of targeting and the inhumanity and inequality of what is considered a “good moslem woman” has never been challenged, or debated freely (or safely). Almost always met with at the minimum a curt dismissal with the accompanied patronizing smile by the mollah dismissing you, and at a maximum, ritual or “honor” killings sanctioned at surprisingly high levels within local official hierachies.

The physical oppression and second class- or one could argue sub-human status of women as symbolized by the applied concept of the hejab, is certainly an item in need of complete reform. Certainly the higher incidents (reported and not-reported combined) of rape within moslem communities suggests that the idea of covering and shutting women up, supposedly in order to protect them from “uncontrollable male urges”, certainly has not worked. Although in spite (or out of spite!), moslem women, like all women seem to continue to flourish even under oppressive moslem male domination.

Seating women at the back of the mosque during prayer, segregation in public places and buses, certainly needs to follow the more important and justice-deserving issues of legal rights, property, and personal responsibility.

Under the protective human and civil rights available to all in the US, this eslamic center at least can speak out against, and offer up alternative ideas for eslam-proper to have to consider. By allowing a reform-centric eslamic center in NY, challenges to the current ideas of the wider eslamic establishment can be delivered without fear of reprisal or recrimination that so often traditionally stifles any debate. Well theoretically at least!

While a lot of Americans are “up in arms” at the prospect of having an eslamic center setting up an ironically “manteau”shop at the old Burlington coat factory (get it?), no one knows what the reaction of the radical side of the eslamic world will be when continuous streams of cries for moderation, and (dare we say it!) the abolishment of the hejab start emanating from Park Place.

Will Imam Feisal Abdul Rauf be eslam’s Martin Luther? Probably not, but the mere prospect of being able to legally critique eslam without fear of “mollahs gone wild” retribution for daring to suggest the slightest alternative thoughts, is too tempting to pass up.

And while this debate is certain to continue, the truth is that no one knows what will happen, and what the real reaction will be from either side, once and if this eslamic center ever opens up for business.