Leave Shiva Nazar Ahari Out of It! 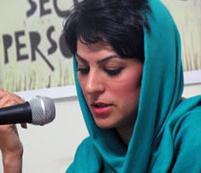 The violations of human rights that are happening in Iran are so gross and blatant, it would be criminal for any fair-minded human being of this century and this planet not to condemn them.  Everyone must know about them and everyone must be outraged about  Iran’s discriminatory laws against women.  Everybody should feel responsible for knowing about the Islamic Republic of Iran’s persecution of women’s rights activists, dissident students, human rights advocates, and religious minorities.  It is upon all of us to tell the world to hold the Islamic government accountable for the way it continues to treat the defenseless Iranians.

Having said that, I am appalled by those who have done nothing but to push an agenda of a military attack on Iran for years to all of a sudden become the defenders and promoters of human rights for Iranian people.  One cannot be in favor of human rights for Iranians and on the same breath push for starving and bombing them.  I will concede that forced with a choice, sanctions are better than bombs.  But after pushing the sanctions forward for months and months and finally seeing them in place, now we are also hearing the neocons talk 24/7 about a military attack on Iran.

I wasn’t fooled and I hope nobody else was, either, when John-Bomb-Bomb-Bomb-Iran-McCain all of a sudden started talking about the Green Movement, the Iranian people’s struggle for democracy, and victims such Neda Agha Soltan last year.  In June of this year, during a speech at a NED event, John McCain honored Iran’s Green Movement and the people of Iran, pushing for sanctions against the Islamic regime.  These days there is escalated talk about a military attack on Iran by the neocons.  I think John McCain should have stuck to singing Bomb Bomb Bomb Iran, leaving the names of Neda Agha Soltan and Shiva Nazar Ahari out of his speech at the NED Democracy Award (video below).  I doubt very much that a brave human, women’s, and children’s rights activist such as Shiva Nazar Ahari would have anything in common with Mr. McCain and his friends who are now working day and night to bomb Iran and the same people Shiva has given her life to defending.  From now on, the neocons should just leave Shiva out of it.