Three Iranian Guys in the Shower 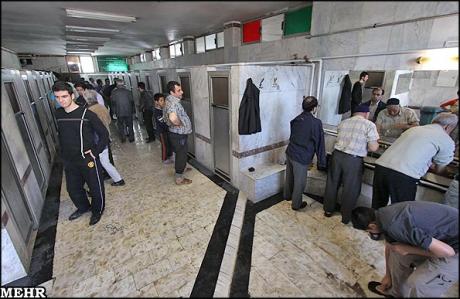 There are certain things that your parents don’t teach you when they put their teenage kids on the plane and ship them to the US to get an education. It is not that they don’t want to, they just don’t know, at least mine didn’t. Among those lessons were the proper etiquette and the code of conduct in the swimming pool, the shower and the restrooms in the US!

You see, in Iran, most men don’t get naked in front of other men! As a young man in Iran, you learn that you are not supposed to show your things to the other men. It is considered rude and impolite to do so, especially if they are older than you are. Also, you learn that you are not supposed to show your ass to the other men either. You take extra care to be protective of your ass, like a virgin! So whenever you go to the swimming pool or the resorts on the Caspian Sea, men generally change into their swimming trunks by wrapping a towel around their waists. And they do the same when they get back into their regular clothing. That’s what everybody did, and everyone gave you the space and privacy to do so.

During my freshman year in college, my two Iranian buddies and I from the same dormitory put our swimming trunks on and headed to our university’s recreation center to check out the Olympic size swimming pool. When we got there, there were a few people in the pool doing laps. They swam and stayed in their lanes, going back and forth, back and forth. We looked at them for a second, then put our stuff by the poolside and said “one, two, three” and jumped into the pool, all three of us, feet first, to make the biggest splash!

You see, in Iran, swimming pools are not for swimming. They are for horse play. You jump in there, make a splash, wrestle with your friends, even girls, push each other’s head down, walk on your hands, stand on each other’s shoulders and all sorts of other things, but not swimming. There is no room for that. And that’s exactly what my buddies and I were doing when people started to stare at us and the lifeguard came over and gave us a warning, to either swim or get out of the pool!

We quickly got bored and went outside to lie down in the sun, next to a couple of girls. One of the guys opened his backpack and pulled out a small bottle of olive oil and started putting some on his body. The smell of extra virgin olive oil (first press) from Varamin quickly filled the air. One of the girls looked over to see what was going on.

“Would you like some olive oil from Iran?” My friend asked. “Oh no, thank you.” The girl replied. The girls then whispered something to each other and buried their faces in their paperbacks. They completely ignored us from that point on!

We then headed to the shower area. The guys were all walking around naked. My buddies and I were the only ones that took our showers with our trunks on. We started looking around and making fun of everybody. “Look at that one, Doodool Talaa…See the white ass on that one…Here comes Dool Ghoncheh…and on, and on, and on!”

It wasn’t that we didn’t want to take our shorts off. We were just uncomfortable doing it in front of each other. Later on when I joined the school team and started travelling with them, it was all fine.

Right after school, I got a job with a reputable firm and started my first day on the job on the 29th floor of a high rise building in the big city. My manager took me around and introduced me to everyone on the floor, including the big boss, the Managing Director. At around 10 o’clock or so, after drinking lots of coffee, tea, free orange juice, and whatever else that I could find, I urgently needed to go to the restroom. As I was positioning myself in front of the stall and thinking about how wonderful it was going to be to relieve myself, there walked in the Managing Director, the big boss of over 200 employees, il Capo dei Capi!

“How are you doing young man? Are you on a project yet?’ He asked while standing in front of the next stall.

“There is a project in Chicago that I am going to get assigned to.” I said while desperately trying to focus on the urgent matter at hand!

“Chicago is my hometown. It is a fun place for young people. Have you ever been there?” He said while making a big splashing sound from relieving himself.

By then my whole system had completely shut down and not a single drop was coming out! As I was trying to keep the conversation going and tell him about how I visited Chicago once, he let a big and noisy one out!

That totally floored me! You see in Iran, if someone lets a big and noisy fart in the middle of your speech, one of two things would happen. He is either a friend, in which case you laugh it off and hit him on the head! Or it is a complete sign of disrespect, in which case you will have to respond. But, this was neither. This was just how Westerners deal with the call of nature and move on!

I flushed and pretended that I was done and headed out. As soon as I knew that he had left the restroom, I ran back and took care of the business.

After that incident I knew that I needed to come up with a back up plan. I just didn’t like the stress of pissing right next to the big boss. And I definitely did not appreciate my conversation being interrupted so rudely, although not ill-intended. So starting the next day, I took the elevator down, one floor at a time, and tried to find a peaceful and quiet restroom. It didn’t take long until I found the spot on the 16th floor. The floor was half empty and there was only an advertising agency of mostly female employees there. The restroom was nice and quiet!

Just recently, when I was visiting my uncle and aunt down south, I took my uncle to one of those hot mineral water pools. The elderly Iranians truly believe in the healing power of these pools. As my uncle and I walked into the empty locker room area to change, we both turned towards the wall, with our backs to each other, quickly changed into our swimming trunks and without saying a word just grabbed our towels and headed to the pool!

Old habits are hard to break!