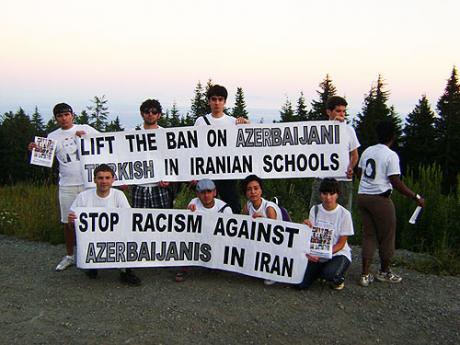 On August 14, several Canadians (and non-Canadians) hiked to the top of Grouse Mountain, a popular Vancouver attraction. If you are from Vancouver, you may dismiss this and say it happens all the time. If you’re not from the city you wonder, what the commotion is about. Bear with me as I offer more context.

This was not just any regular hike, it was one with a cause with its roots in Iran. For years, Azerbaijanis in Iran hike up to Babek Castle to celebrate national hero, Babek Khorramdin who defended Iran against Arab invaders. Hiking up the mountain is of high symbolic importance for Azerbaijanis, as Babek was also Azerbaijani. For participants of this hike, it is about “survival and resistance of an entire people in defiance of an internal colonial force determined to annihilate its very existence.” It is also about courage under fire as this celebration is meticulously met with Government oppression (see Amnesty International statement and ADAPPMonthly Report). It is no wonder Azerbaijanis feel second-class in their own home.

I was fortunate enough to be at the inception of the Vancouver commemoration. Azerbaijanis in Vancouver, in show of solidarity decided to organize its first ever GROUSE GRIND HIKE FOR AZERBAIJANI EQUAL RIGHTS IN IRAN. We created afacebook event, a YouTube announcement, drafted a statement (see video below), made t-shirts, and hiked-up to the top of Grouse Mountain to demand basic rights for all, especially the Azerbaijanis—who are the largest minority in Iran, over 20million, by some conservative estimates.

Yes, it was fun, exciting, although there was a time I was certain I would not make it up the mountain—this beast is a very, very, very, steep 2.9km trail (almost 2 miles). But my companions didn’t let me bail, besides how would I report on this historic event if I did!

On a somber note, as we passed the ¾ mark, we met an Iranian of Persian heritage with whom I had a long conversation. The gist of it was he didn’t understand why Azerbaijanis were unwilling to support Iran’s Green Movement—a seemingly national opposition group. I tried to communicate that it was not because Azerbaijanis don’t want change, but the change the seek is innate—freedom to celebrate their heritage. Azerbaijanis have been dealing with Government oppression for almost a century and are well-versed on empty promises. For all its gravitas, the Green Movement is yet to discuss the issues faces ethnic minorities, and that reads loud and clear for most Azerbaijanis (look out for my next entry, where I get to meet ). However, I don’t speak for all Azerbaijanis, I know several are still holding out hope that this issue will still get address by the darling movement of the West. (I should mention that we met some other Persians on our way who were quite supportive of our cause as well.)

Here is the statement read by one of the organizers:
http://www.youtube.com/watch?v=zSlYYO97jFw