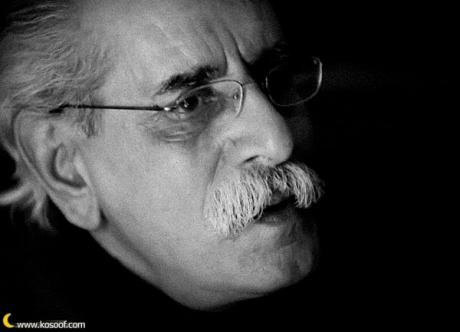 Are you one of the millions of Iranians who wondered, at least once, where Nozar Azadi went? Nozar Azadi, also known as agha-ye Ghatebeh, is without a doubt one of Iran’s most beloved actors of all times. He is the man who performed some of the most memorable theatrical pieces in the Iranian television history. His famous one-liners have been living a life of their own in the Iranian contemporary lingo for at least three decades now.

Who could forget this man? Some of us have looked high and low for him, looking for news about his whereabouts, his health, and his activities. Well, wonder no more! Nozar Azadi has spent the past 20 years painting! The lucky Iranians of Southern California are going to be treated to an exhibition of Mr. Azadi’s works, Rainbows, at the Seyhoun Gallery in Los Angeles between August 28th and September 9th, 2010. In his invitation card for the event, Nozar Azadi talks about his decision to leave acting after his legendary performance on the Iranian TV Series, “Italia, Italia.” He says:

“Since my youth, my constant pastime next to acting and literature was painting. But working as a professional actor, laboring and sweating my life while performing on stage or on television screen, there were hardly any opportunities left for me to paint. Many years ago, I was faced with premature retirement and isolation. After finishing production of the television series, Italia, Italia, I left the stage for several physical and psychological reasons and chose a life in isolation. My isolation and distance were mixed with diaspora, and as Shamloo said, “my lamp did not burn there.” My overwhelming physical illnesses led me to feeling like my life was futile and that I was eroding and fruitless, burning my life and my body. I felt aimless like a fish out of the water, flailing, when my old attachment to painting came back to me, threw healing rays to my life, and provided a strong foothold for me to be and to remain, healing my anguish and helping me toward artistic creation. It has now been more than 20 years since I started painting again and the main subject or character of my works is the rainbow, or as we call it in Persian, tirajeh…”

So, there you have it folks! Please go to visit Nozar Azadi’s website to see more photographs of him, old and new, and a few of his works. Please do remember to leave him a comment on his guestbook, welcoming his return to public life. I have been trying to get an interview with him and to ask him some questions on behalf of the readers on Iranian.com. If I do, you guys will be the first ones to know!

In the meantime, if you live in the Los Angeles Area, don’t miss a chance to meet the artist on the opening night and to see his works for a few weeks later this month. Here are the details: